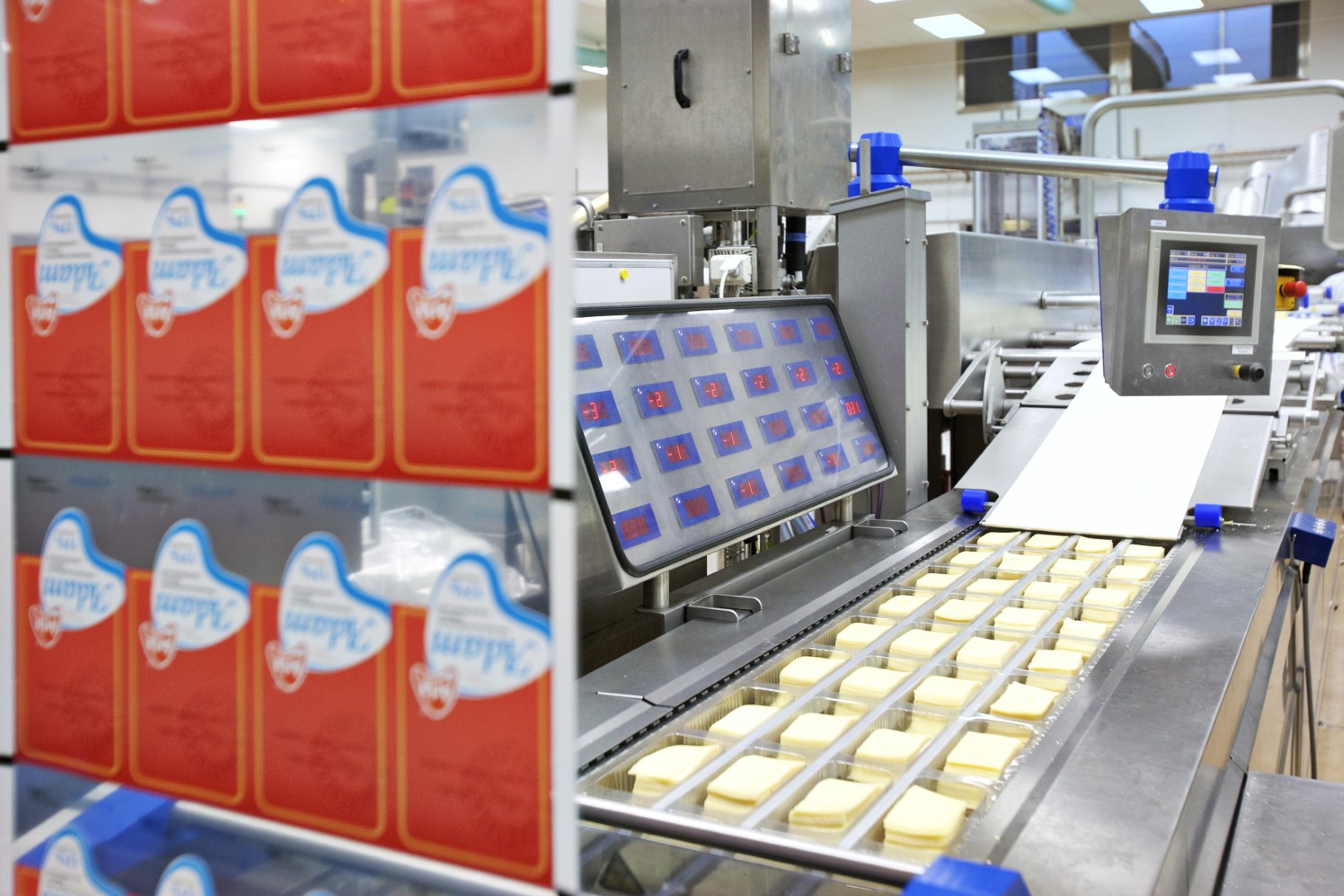 Whether it concerns large cheese blocks for the catering industry or sliced cheese for consumers, cheese products from Arla Foods are renowned in Scandinavia and other parts of Europe. In its production facility in Götene (Sweden), Arla Foods packs sliced cheese with the unique Amcor E-Close® solution on a fully automatic production line with a SEALPAC RE30 thermoformer at its centrepiece. We spoke with Torbjörn Wiechert and Thommy Pheiffer, who designed and implemented this high-capacity line together with SEALPAC and its Swedish distributor JS Teknik, about the challenge of packaging development, and about the best recloseable system in the market.

With 16,000 employees and production facilities in no less than 12 countries, Arla Foods (www.arlafoods.com) can be regarded as a leader in the production of milk-based products, such as cheeses. Arla Foods is owned by the farmers that supply the crucial element to all its products: natural milk. One of the company’s strengths is that it provides food products under conditions where the entire value chain from cow to consumer is controlled.

On average, between 400 and 500 tons of cheese (shredded, sliced and in chunks) move through the packaging area of Arla Foods in Götene per week. With the demand for sliced cheese rising every year, the company decided in 2011 to invest in a new thermoformer line. Next to its existing 150gr and 300gr retail packs, this line also had to run recloseable 400gr packs for large households, as well as 750gr packs for hotels, catering and restaurants. Torbjörn Wiechert, Project Manager at Arla Foods, explains: ‘In 2009 we bought a SEALPAC thermoformer for packing sliced cheese at high speeds. Based on that experience, and taking into account the specific challenges of the new line, we decided once again to work closely together with SEALPAC and JS Teknik (www.jsteknik.se), exclusive distributor for SEALPAC thermoformers in Sweden, with regard to the line configuration. They were able to develop a die set that could handle all the different pack formats with short changeover times, and to fulfil our key demand at the start of the project: a significant output of 144 packs per minute!’

Special attention was given to the recloseability of the 400gr pack. Originally, the marketing department of Arla Foods in Stockholm came up with the idea of applying a top-formed web that would operate as a lid. But because this requires an extra forming station, which would reduce the loading area and therefore make the whole line longer than the available space in the production area, the engineers in Götene started to look for alternatives and came up with a non-dedicated solution: the Amcor E-Close® system. This system has been developed by Amcor Flexibles (www.amcor.com), part of Amcor Limited, which employs more than 33,000 people globally and can be regarded as the world’s leading supplier of flexible packaging.

Amcor E-Close® is the latest innovative easy-to-open and re-close solution for Modified Atmosphere Packaging on thermoformed trays. It combines Amcor’s extensive know-how in pressure sensitive adhesives with state-of-the-art laser micro perforation technology. How does it work? The special Amcor E-Close® film consists of two layers. The tightly sealed and laser perforated 25 my bottom layer creates an edge around the pack, hence providing a much bigger surface for re-closing than other common solutions, while the 40 my top layer allows for multiple re-closing. Consumers simply peel the flap up and down to open and close. Over and over again.

As Amcor’s easy-to-open and re-close system is fully integrated in the laminate, it saves on common re-close features like zippers or stickers, hence reducing material usage and carbon footprint. Thommy Pheiffer, Packaging Engineer at Arla Foods, adds: ‘The Amcor E-Close® film does not stick to the knives in the cross-cutting station like common hot melt-based recloseable films do, because it is based on a similar idea as self-adhesive post-its: it leaves no glue wires and is FDA approved.’

Torbjörn Wiechert: ‘Compared to our relatively narrow consumer packs, the 400gr Amcor E-Close® pack provided us with improved branding opportunities. Due to its high rotogravure print quality, the Amcor E-Close® film allowed our marketing department to design a striking film print. Furthermore, the ingredients of the packed cheese are now printed on the top film, instead of on a label. More consumers are likely to read it, and we saved the space needed to mount a top labelling system on the thermoformer.’

On 3 November 2011 Arla’s Amcor E-Close® pack received the prestigious Scanstar packaging award, the famous competition organized each year by the Scandinavian Packaging Association. The results were disclosed during an award ceremony in Sandefjord, Norway. Special mention was given to the originality, protective quality, cost efficiency, design and user friendliness of the Amcor E-Close® solution, which enabled Arla Foods a new positioning in the cheese market.

To produce the Amcor E-Close® pack, as well as the other retail and volume packs at high speeds, Arla Foods in Götene configured the line together with JS Teknik, exclusive distributor for SEALPAC thermoformers in Sweden. Torbjörn Wiechert: ‘We strongly value JS Teknik’s and SEALPAC’s ability to
listen to our demands and to bring solutions. Their flexible attitude make them extremely pleasant partners to work with.’

The current line starts with a Schiwa slicer, supplied by Nemco AB (www.nemco.se). From there the slices are weighed and transported to the loading area of the SEALPAC thermoformer, where the rigid film packs arrive from the forming station. After fully automatic loading, the packs are sealed under MAP, then to move on to the cross-cutting and longitudinal cutting stations, after which they are discharged at 12 packs per cycle, 12 cycles per minute. After converging to single lane, a bottom label is applied and the packs are transported to the floor above, where they are automatically placed in cardboard transport boxes.

Pheiffer: ‘Due to the laser perforation used in producing the Amcor E-Close® film, we had to be convinced that this did not affect the permeability of the film. We therefore paid a visit to Amcor’s production facility in Burgdorf (Switzerland) to understand more about the production process. Just to be sure, we also shipped cheese to the SEALPAC factory in Emmen and had that packed for shelf life testing in Sweden. In fact, during the whole project we must have visited SEALPAC at least five times for configuration meetings, trial runs, sample making and – naturally – the factory acceptance Test. We always feel very welcome in Emmen, as the people there, no matter if in sales, production or at the reception, always want to lend a hand.’

Easy to exchange, safe in use

The entire packaging line is 17 meters long and consists of two sealing stations and two cross-cutting stations to deal with the various packing formats and systems. Wiechert: ‘Due to SEALPAC’s quick exchange systems, our operators are able to change in between 5 to 15 minutes to a different format themselves. This may sound logical, but we have several lines where only our maintenance personnel are allowed to do a format change. As an example, SEALPAC offers our operators a special crane for quick and easy exchange of the roller shear in the longitudinal cutting system. With other lines, we cannot take that risk as both the cutting system and/or other equipment in the production area can easily be damaged.

As quality assurance has top priority at Arla Foods, the line has been equipped with several control mechanisms, such as leak detection in the forming station, film-in-chain detection and film splice detection. Wiechert: ‘We are used to this on the existing SEALPAC lines and see it as a standard for any new lines, as it allows for quick and easy fault finding.’

Wiechert: ‘With the new line we are able to pack our sliced cheese safely with a shelf life of 70 days under modified atmosphere by applying a mixture of 40% CO2 and 60% N2. Furthermore, we achieve the high outputs that we wanted and only need two employees to watch the entire line.’

Pheiffer concludes: ‘We believe that the Amcor E-Close® system offers the best recloseable function in the cheese market to date. We have now also tested it on our 150gr packs, as we believe that this easy-to-open and re-close function should be made available to all our customers. Despite the more expensive top film, we are eager to implement the Amcor E-Close® system on our retail packs as well. It will be worth it, because we are talking about a whole different league in easy-open and re-close. Moreover, it fits the ambition of Arla Foods to lead the market!’