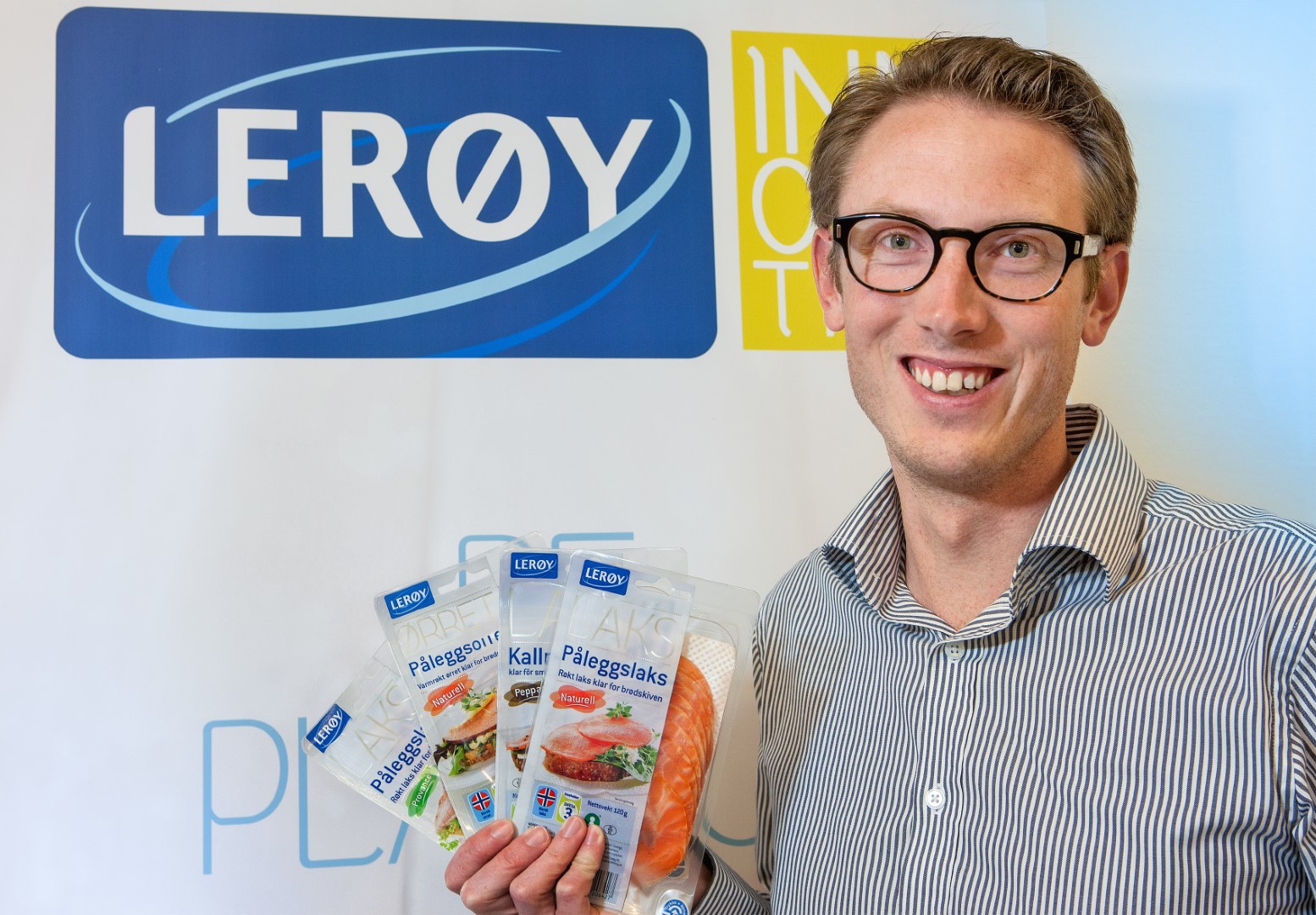 Whether it concerns whole fresh salmon for the catering industry or smoked salmon in retail packs for consumers, Leröy’s seafood products are renowned throughout Europe. In its production facility in Kungshamn (Sweden), Leröy developed a unique sliced salmon pack that is produced on a fully automatic line with a SEALPAC RE25 thermoformer at its centrepiece. We spoke with Mattias Gunnarsson, Commercial Manager and Vice President at Leröy Smögen Seafood AB, about the importance of continuous product development and packaging innovation.

Beautifully situated on the rocky coast of Sweden, close to the picturesque island of Smögen, Leröy Smögen Seafood AB overlooks the sea that hosts the product it packs: salmon. The company is part of the Leröy Group (www.leroy.no), the second largest salmon producer in the world, which has a strong history in sales and distribution. It was only about 15 years ago that the Leröy Group also took up fish farming. When the risk of a salmon shortage started to occur in the nineties, due to the rising demand for this healthy product, Leröy decided to integrate fish farming into its core business. It now produces 150,000 tons of salmon per year in the seas around Norway. A large share of this production is delivered to Leröy Smögen for further processing.

The importance of continuous product development

Mattias Gunnarsson, Commercial Manager and Vice President at Leröy Smögen Seafood AB, worked as an external consultant when the construction of the production facility in Kungshamn started in 2004. By the time it was finished in 2007, he was asked to join the company where he was employed as Operations Manager, later to become Production Manager. Currently, he is responsible within Leröy Smögen for purchasing, product development and sales. As Gunnarsson explains: ‘With our strong history in sales and distribution, Leröy stands out in offering value added products. As such, two employees at Leröy Smögen are fully dedicated to product development and packaging innovation. And it pays off; about 50% of our current turnover comes from products that we developed in the past 3 to 4 years!’

An idea that had existed within Leröy Smögen for quite some time was to introduce smoked salmon slices to be used on sandwiches as an alternative to sliced meat. But how to slice the salmon? Gunnarsson: ‘We had to come up with a process where we could produce smoked salmon in a solid shape, which could then be sliced at a certain temperature. Also, due to our clean list of ingredients, we could not work with food additives. It took us around 1½ years to develop the right process, which we obviously keep to ourselves, but now we are able to produce perfectly sliced salmon in three different flavours: Natural, Pepper and Provence.

It starts with the pack

In January 2011, Leröy Smögen bought a SEALPAC RE25 thermoformer to pack its innovative sliced salmon product. Gunnarsson: ‘As always, it started with the pack. For us it was clear that it had to be a thermoformer solution, as this is the common packaging system for sliced meat. Furthermore, it is a cost-efficient solution. We started testing packaging materials and approaching potential suppliers for the line. One of them was JS Teknik (www.jsteknik.se), exclusive distributor for SEALPAC thermoformers in Sweden, with whom we have had an excellent cooperation since the start of the factory in 2007.”

Based on Leröy’s experience in thermoforming, a list of demands was set up. High on this list was the capacity of the line, which is not only determined by the speed of the machine in cycles per minute, but also by how many packs fit in the tooling. Furthermore, due to limited space in the production area, the length of the machine was an important issue. Gunnarsson: ‘In the end, JS Teknik came up with an extremely efficient configuration of the SEALPAC machine, which achieves high outputs and even allows us to add robot loading in the future. By applying two film unwinders, quick exchange of the top film was optimized. After visiting the SEALPAC factory in July 2010, where we were able to make sample packs, it was clear that we would move forward with them.’

The current line starts with a Thurne slicer. From there the slices are transported to the loading area of the SEALPAC thermoformer. After loading, the packs are sealed with a printed top film under MAP, to move on to the cross-cutting and longitudinal cutting stations, after which they are discharged at 9 packs per cycle. By adding robot loading, this line will be able to run at 10 cycles per minute.

Leröy is the first company in Scandinavia to equip its packs with the so-called EasyPeelPoint system, which was developed by SEALPAC in 2010. This revolutionary easy-opening method allows for effortless opening of packs by consumers, which Leröy identified as a significant demand. Due to the EasyPeelPoint system the peel corner is integrated within the sealing contours of the pack. The corner of the top film is pressed into a round cavity and releases from the sealing edge. With the resulting easy-to-grip peel tab, the top film is removed from the pack with minimum force.

Another important feature of the pack is the hanger hole, which allows for vertical presentation at retail. By applying a modified atmosphere in the pack (in the sealing process the air inside the pack is replaced by a gas mixture of CO2 and N2), each slice can easily be removed from the pack, particularly when compared with the common vacuum packs. SEALPAC’s reliable sealing process, which achieves less than 0.5% residual oxygen level in each pack, plays an important part in achieving the maximum shelf life of 21 days.

During the European Seafood Exposition 2012, hosted annually in Brussels (Belgium) for experts throughout the seafood industry, Leröy won a Prix d’Elite award for its Påleggslaks Provence in the Convenience category. Special mention was given to the perfect size of the salmon slices and the extremely consumer-friendly packaging.

Gunnarsson: ‘Thanks to SEALPAC we were able to make packaging samples for consumer testing. Next to the easy-opening functionality, these tests were also done to get feedback on the entire concept of smoked salmon slices, as well as on the actual taste of the product.’ The sliced salmon packs were first introduced in Norway in September 2011, and are currently distributed through all major Norwegian retail chains: ICA, Coop, Norgesgruppen and Rema 1000. In February 2012, Leröy launched the product in Sweden, where it is now part of the optional listing at retailers such as Axfood, ICA and Coop. Later this year, Leröy will introduce its innovative product to the Finnish market.

Gunnarsson concludes: ‘Looking at the smoked category, we see a clear trend from vacuum packaging to MAP, as it allows consumers to take the product out of the pack more easily. In addition, consumers are constantly looking for convenience. We therefore expect to extend our product portfolio with SEALPAC’s EasyPeelPoint system in the near future.’ Since the start of the company in 1961, Leröy Smögen has seen its number of employees grow to the current 130. But is does not stop there. As we speak, the company is doubling its production capacity in Kungshamn to around 12,000 tons. With the rocky coast in mind, dynamite is required to make this happen – a symbol of Leröy Smögen’s ability to shake up the market with new innovations.