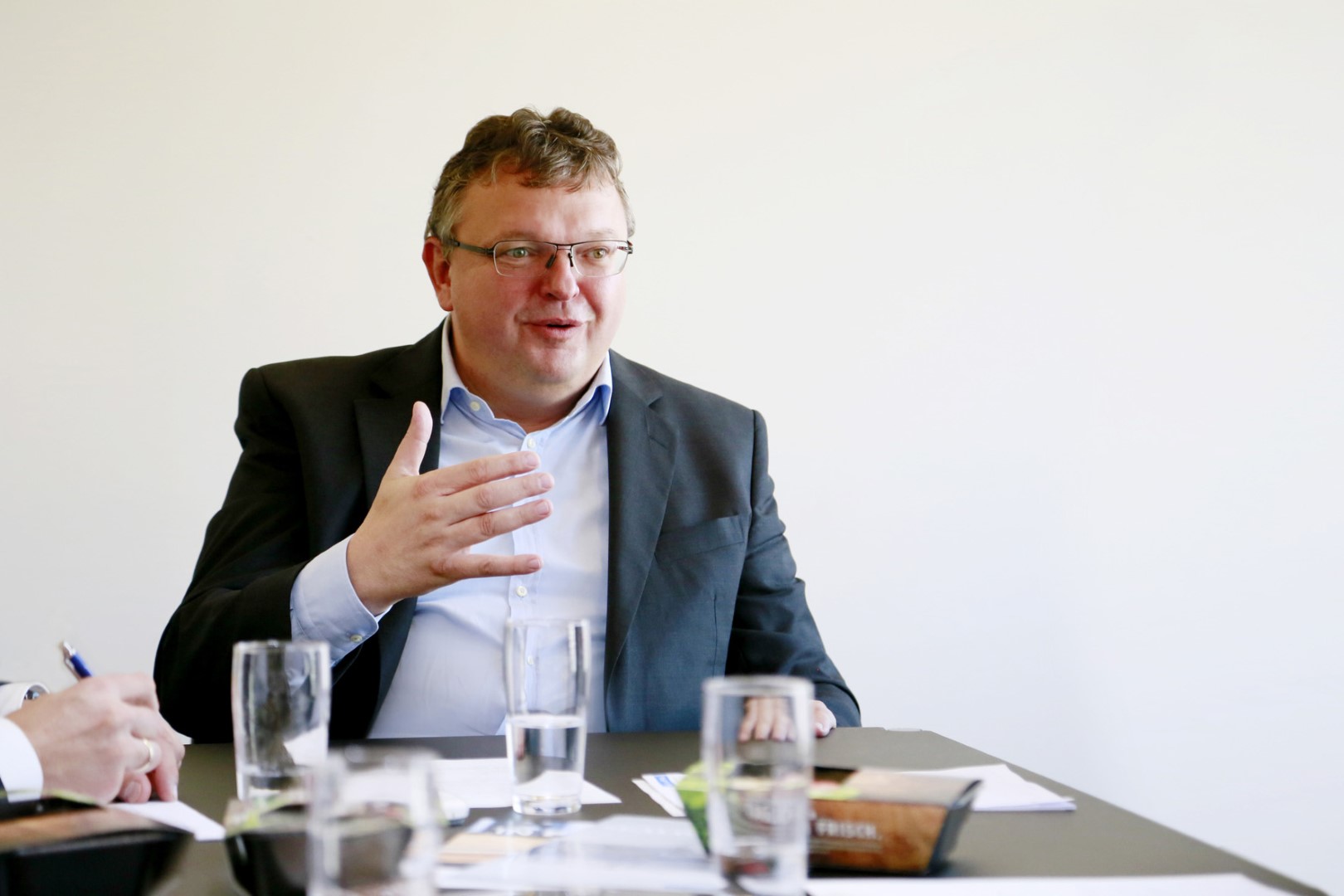 The convenience segment is booming. Refined products in innovative packaging, which simplify their handling, are pushing the market. One of the leading suppliers in the convenience segment is BARD-Metzgerei-Produkte GmbH, based in Saarbrücken in the southwest of Germany. With semi-finished and finished products, it has conquered a niche and is since recent represented with a new range of single gourmet ready meals on the refrigerated shelves at retail. We spoke with Managing Director Richard Bard and Operations Manager Alexander Gehlen about the packaging concepts that allow BARD to survive in this fiercely competitive market. And about how long-lasting partnerships, for example with packaging specialist SEALPAC, prove their value even in emergency situations.

Family company with 160 years of history

BARD-Metzgerei-Produkte GmbH (www.bard-schnellekueche.de) is a 160-year-old family business that remained a traditional butcher with multiple branches in the Saarbrücken area until the late 1990s. Nowadays, BARD is a modern and all-round food service company that supplies semi-finished and finished products to the food counters within retailers, but can also be found more and more in the pre-packaged segment. As the company’s Managing Director Richard Bard explains: „Our butchery always stood for traditional and regional products, for which we were famous in the surrounding area. In addition to our own shops, ever since the late 1990s we started supplying home-made foods and stuffed dumplings to the catering sector, for example to breweries with adjacent inns. However, larger supermarkets in the vicinity offered increasingly good quality at attractive prices over their counters. We quickly realized that the future lies in the large retail market, where specialty stores like ourselves would soon face difficulties. So we had to focus on what makes us unique. This lead us to particular products, such as our ‘Kohlroulade’ (cabbage leaves stuffed with minced meat) and pork fillet in puff pastry – products for which consumers would visit us specifically. We came up with the idea to package them and make them suitable for retail.“

BARD’s jump into the convenience segment all started with the ‘Kohlroulade’, today still the company’s bestseller. Richard Bard: „I manually started packaging and labelling these products in provisional trays with stretch film, so that I could present them to the retailers. The feedback was positive, but I was also given some homework. Comments for example concerned traceability, HACCP, professional packaging and labelling, gastro trays for selling though supermarket counters, and several more. With regard to food safety and hygiene, I asked for support from the University of Applied Sciences in Trier, which has a faculty specialized in food technology.”

To discuss packaging issues, BARD and packaging expert SEALPAC met at the IFFA exhibition in Frankfurt in 1998. It was the start of a decades-long and trusting partnership. The first tests were performed as true teamwork on a semi-automatic traysealer with a more or less suitable tool, which allowed for packaging under modified atmosphere. Owing to this more professional packaging, larger retailers started taking an interest in BARD’s products and accepted the company as their specialty partner. But soon BARD reached its limits in terms of capacity and had to rethink its general market orientation. Richard Bard: „In the end we decided to separate ourselves from the butchery business by fully focusing on semi-finished and finished products for retailers.”

BARD’s latest range of single gourmet meals is aimed at consumers that like to enjoy good food fast and without complications. These products are not bought by families, but by people that prefer a ready-to-eat yet delicious meal in their lunch break, where every minute counts, or in the evening after work. This ambitious market segment not only demands convenient handling, but also excellent taste. If those conditions are met, it is willing to pay a reasonable price. BARD’s newly introduced gourmet range consists of nine different ready meals in single portions, among which off course the famous ‘Kohlroulade’ in bacon sauce, but also the classic beef roulade and vegetable burger in creamy mushroom sauce. All these products are offered in sealed trays with a four-colour printed sleeve with viewing window. Their high-quality appearance underlines BARD’s business requirements.

What makes this new range of ready meals special is that they are supplied in so-called airPET® Touch trays, manufactured by Silverplastics in Germany. Alexander Gehlen: „Such trays are suitable for pasteurization and sterilization, extremely lightweight and heat resistant, which makes their handling even easier. Sealed airPET® Touch trays can be placed straight from the freezer or refrigerator into the consumer’s oven or microwave, with the tray able to withstand temperatures of up to 200 °C. Due to its extraordinary isolation properties, the outside of the airPET® Touch tray ‘keeps cool’ and can be taken out of the oven or microwave with bare hands. SEALPAC traysealers allow us to reliably seal these light-weight trays.”

Richard Bard: „We exclusively package our products with traysealers, as this packaging system is able to present our products with the same craftsmanship we produce them by. Off course we could also apply cheaper vacuum bags or thermoformed packaging, but from our point of view this does not do justice to the product. As such, we also reject standard packaging systems with film residue over the sealing edge and have since 1998 adopted SEALPAC’s InsideCut system, where the top film is cut and sealed to perfection within the edges of the tray, resulting in an outstanding presentation.”

In 2011, ironically on the night of Halloween, a fire destroyed one of BARD’s two production halls, leaving the company without an office, machines or even cooling system. Richard Bard: „We immediately realized the importance of restarting our production at the shortest possible notice, as our customers would otherwise start looking around. In these situations, partnerships are extremely important. Luckily SEALPAC was able to supply us with tray-sealing equipment in a record time, which allowed us to start up production again just two weeks after the fire, even if this was with improvised workflows.” After replacing the equipment that was destroyed, BARD used the occasion to expand even further, installing two new tray-sealing lines within just 18 months. Nowadays, BARD has six SEALPAC A6 traysealers. Alexander Gehlen: „Starting all over again had its advantage. It allowed us to design our building and production flows precisely to our needs. From the required hall and door heights, up to machine connections and optimal line control.”

In designing its new production space, BARD was primarily looking for a combination of high output with maximum flexibility, for example to address its seasonal production. This is why the company decided to have only one type of traysealer, the SEALPAC A6, which allows the company to exchange its fourteen available tools between the various machines. Furthermore, SEALPAC’s tooling quick exchange system allows its operators to change to different tray heights or materials (e.g. plastics, aluminium and airPET® Touch) within just minutes. Centrally adjustable tray guidance assists the operators in achieving error-free changeovers. Furthermore, SEALPAC’s latest generation of traysealers is standard supplied with ergonomic tip-up protection covers, which not only save space, but also provide easy access in case of maintenance or cleaning. Other requirements included an optimal film tension for improved pack appearance, accurate gas values for maximum shelf life and equal sealing temperature to achieve an excellent peel of the top film. All these requirements were fulfilled with SEALPAC’s A6 traysealer.

Richard Bard: „Our philosophy will always be to produce first-class products in a consistent high quality with optimal taste at corresponding prices, as we are convinced that even in a mass market there is room for such niche products. This demand for quality is just as important in our packaging and the equipment that we use. Our success, based on a mixture of tradition, constant innovation and uncompromising adherence to BARD’s quality standards, clearly proves us right.”