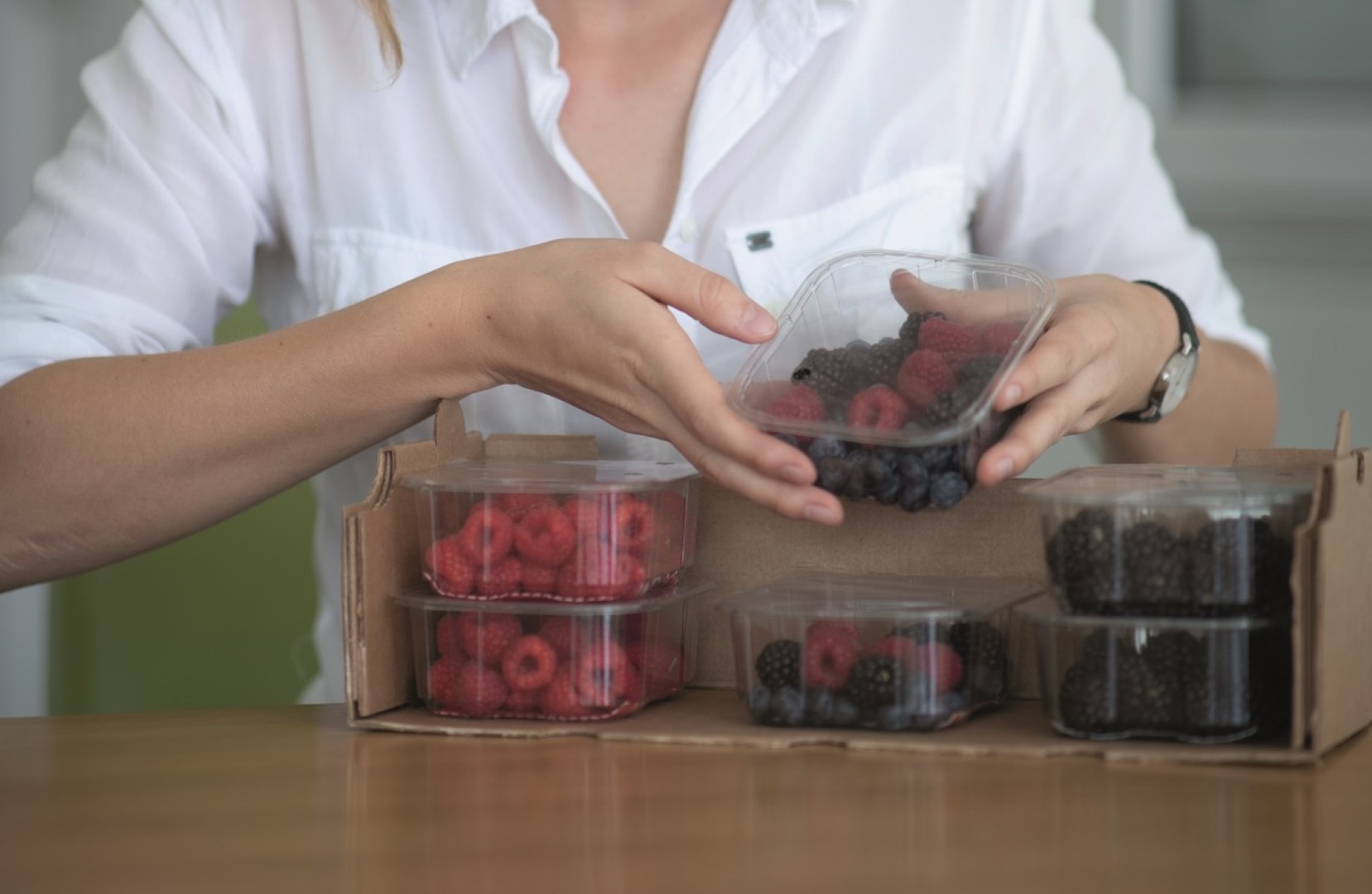 Fresh berries are a real power snack: light and tasty, with few calories and lots of valuable vitamins, well suited for use in muesli, smoothies or yoghurt, as well as for baked goods and many more. They can be obtained, for example, through the company Baumann Vertriebs GmbH & Co. from Geiselhöring in southern Germany. This family company, which has existed for several generations, has been active in the berry business since 1995. With a team of 64 employees and around 780 directly employed seasonal workers, Baumann cultivates around 960 hectares of land and supplies food retailers throughout Germany, as well as Austria and Switzerland.

The company is clearly feeling the growing berry trend. Starting this season, Baumann has been delivering its fresh fruit in trays made from resource-saving rPET. Instead of using a snap-on lid, these trays are now sealed with a thin, peelable top film. For this purpose, a SEALPAC A6 traysealer was purchased. In the process, Baumann benefited from the comprehensive advice and support of Sealpac GmbH, which even allowed the company to open up a new business area. We spoke with Annika Baumann, CEO at Baumann Vertriebs GmbH & Co, about the company’s move towards tray sealing.

Baumann Vertriebs GmbH & Co. specializes in growing blackberries, raspberries and blueberries, among other things. As CEO Annika Baumann explains: „The consumption of fresh berries has increased significantly. In the 2017/2018 season, the market in Germany grew by three percent. In the next season, the growth was seven percent. There are several reasons for this. People’s eating habits are changing, for example as a result of increased health awareness. More and more consumers are paying attention to a balanced diet, which also includes a healthy breakfast. Our vitamin-rich, versatile blackberries, raspberries and blueberries are perfect for that.

Fresh berries are nowadays available in Germany from January to December. This makes them more familiar to consumers, who now add them to their shopping list out of habit. And finally, fresh berries are wonderfully suitable as a healthy snack between meals, thus fitting in with the on-the-go routines of many consumers. As a result, our products are no longer just found at retail in the fresh produce department, but also on the convenience shelves. This encourages buying on impulse.”

Baumann entered the berry business in 1995 with blueberries by using pot cultures, where the plants are grown in pots under artificial conditions. Today, it supplies food retailers all over Germany with raspberries and blackberries, as well as smaller volumes of blueberries and strawberries. In addition, it delivers asparagus to food retailers in Germany, Austria and Switzerland. In 2012, Baumann invested in greenhouse tents in which either three rows of raspberries or blackberries are grown. In total, the company has around 45 hectares of raspberries and blackberries, the cultivation of which is similar. They are mainly kept in substrate pots. The greenhouse tents, also known as tunnels, together with a sophisticated drip irrigation system, enable Baumann to optimally control the crops. Annika Baumann: “We use very specific amounts of fertilizer and water, which is why we never use a drop too much or too little. We also exclude external factors, like rain or other risks connected to cultivation in open air. In this way, we can work on the size of the fruit and precisely plan the time and quantity of its harvest. In 2018, we harvested raspberries in this way until November. This year, the harvest is expected to end a little earlier.”

Around two years ago, Baumann was required by food retailers to save on plastic in its packaging by June 2020, among other things by switching to tray sealing. At that time, the company delivered its berries in plastic trays that were manually fitted with a snap-on lid. The entire production was tuned and optimized to this process, which is why the company at first did not see a reason to modify. Annika Baumann; “Nevertheless, we started working on change. Starting this season, we have been packaging our berries in plastic trays made from resource-saving rPET. The trays are sealed with a top film in a fully automated manner. The implementation of this brand-new packaging system has significantly changed our process and brought a number of, sometimes unexpected, advantages.”

In 2005, Baumann purchased a first-generation SEALPAC SP350 traysealer for packaging asparagus. The company is still successfully using this machine and quite happy with it. Based on the existing partnership with Sealpac GmbH, a request was submitted for an additional traysealer to package berries. Using Sealpac GmbH’s expertise, especially in understanding the market and available materials, Baumann decided to purchase a medium-output SEALPAC A6 traysealer.

Baumann was strongly supported by Sealpac GmbH in its transition to tray sealing. Important questions were answered together: should we start with the equipment, the tray or the film? Is a protective gas mixture required? Should the packaging be reclosable? What additional equipment is required for weighing and labelling? As an example, the companies jointly travelled to the Fruit Logistica exhibition in Berlin, to get an overview of the various options in terms of materials. This led them to the rPET tray, produced from collected, cleaned and shredded PET, like we know it from soda bottles.

One of the special features of the new process is that the trays are filled with berries in the field. After arriving at the production facility, the trays are brought to their correct weight by means of a multi-head weighing system. After the weighing process, the trays are fed on a double lane conveyor into the SEALPAC A6 traysealer. The A6 reacts flexibly to the in-feed, as it cannot be guaranteed that the exact number of trays is always arriving on both lanes at the same time. This is why the lanes work independently, to ensure that all trays are reliably sealed.

The A6 seals the rPET trays with a peelable top film, which has been pre-perforated, to allow for optimal exchange of oxygen and moist. Since most labelling systems only work single lane, the trays had to be converged after sealing. For reasons of space, this was implemented directly on the traysealer. The trays now run out of the machine in a single lane, to be labelled, collected and picked. The limited space at Baumann’s facility also proved to be a challenge in terms of efficiency. In the end, the line was tailored to the available space and designed in a U-shape without reducing its output. Although the SEALPAC A6 is regarded as a flexible traysealer for medium outputs, it is still capable of reliably sealing between 120 and 140 trays per minute.

The importance of hygiene

SEALPAC’s proven hygiene concept, initially designed for meat production, also works well for the packaging of fruit and vegetables. The traysealer is made entirely of stainless steel, whilst cleaning and maintenance take place ergonomically at working height. Tip-up covers expose the entire machine, so that all components are easily accessible. Annika Baumann: “Cleaning our equipment is an important topic. Being a processing company, we deal with completely different certifications than agricultural companies. Compared with other equipment, both the handling and cleaning of the SEALPAC traysealer are extremely operator friendly. Furthermore, the equipment has been approved by the renowned GS institute, which gives us additional security. Whenever I walk around with my checklist, I can tick off the A6 right away, making these formalities a lot easier.”

The new trays have excellent stacking properties, not just for Baumann, but also for the retailers. Annika Baumann adds: “We were able to further optimize logistics through an even more efficient use of our transport boxes, because these can now be filled with at least twelve packs instead of six. That will certainly be a topic for the autumn talks with our customers. Preserving resources is important to us as an agricultural production company, but is also a real buying incentive for many consumers that pay attention to sustainability. The fact that less plastic is used for the packaging is clearly visible, since we moved from a snap-on lid to a thin, but solid top film. The reliable seal ensures safe transport of the tray, where the top film can be easily removed from the tray by the consumer. Overall, we are very satisfied with our investment, which has brought many improvements for ourselves, our retailers and our consumers. We even opened up a new business area, quite unexpectedly, by operating as a contract packer for other producers that cannot yet keep up with the requirements of food retail.”

Sustainability in the future

As Annika Baumann concludes: “In the future, we want to differentiate ourselves even more in terms of sustainability. We plan to put our berries on the market in a sealed cardboard tray. We already know that the SEALPAC A6 traysealer is capable of processing these trays without compromising on reliability and is therefore well suited to implement this project. In addition, we will always keep looking for new ideas on improved freshness and shelf life extension, for example by applying a protective gas mixture. The device that can do this is already available on our A6 traysealer.”