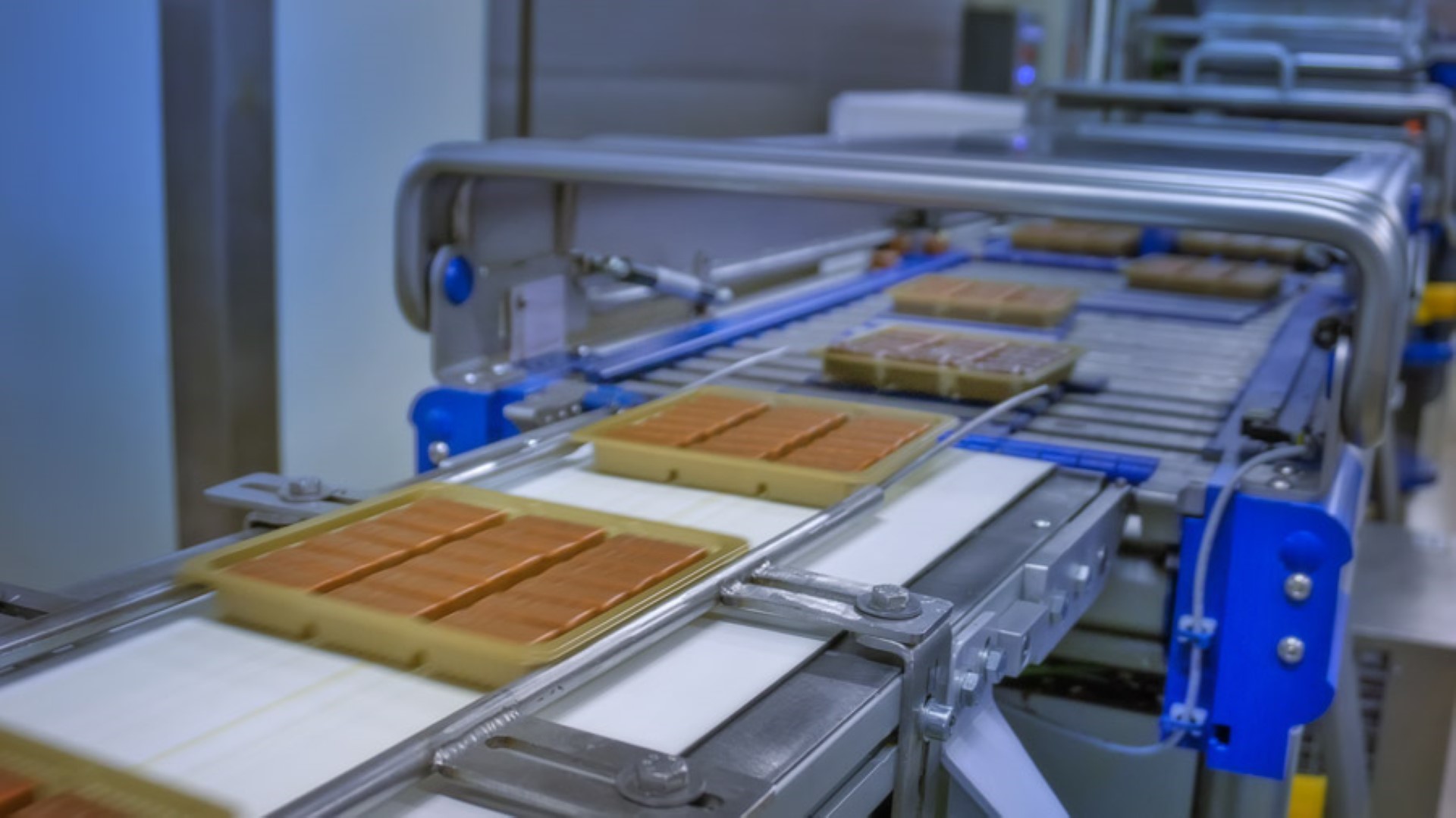 Located in a historical building in the centre of Warsaw, around 1,000 employees of the Polish confectionery company Wedel put effort in producing and packaging finest chocolate products for markets as far as the United States. In 2013, LOTTE Wedel largely invested in tray-sealing technology for its best-selling product: Ptasie Mleczko. In close partnership with packaging expert SEALPAC and its Polish distributor Premac, they took up the challenge of designing two high-output packaging lines for their chocolate covered marshmallows. It is a sweet story to tell.

The history of the LOTTE Wedel company starts in 1851, when Karol Ernest Wedel arrives from Germany in Poland. Accompanied by his wife Karolina, he opens a confectioner’s shop at Miodowa Street in Warsaw, where he starts selling sweet delicacies and serving drinking chocolate. The founder’s son, Emil Albert Fryderyk Wedel, apprentices in candy and chocolate factories in Western Europe before inheriting and expanding his father’s business. Under his command, the first Wedel factory opens in Warsaw. His descendant, Jan Wedel, opens a second factory in the Praga district of Warsaw, on the Eastern bank of the Wisla river. The company managed to continue production during the first few years of the Second World War, but its buildings were destroyed during the Warsaw Uprising. After the war, Wedel rebuilt the factory in Praga.

Since June 2010, Wedel is part of the LOTTE Group, a South Korean-Japanese conglomerate. It is their first investment in Europe although they are the largest chewing gum manufacturer in Asia and third largest in the world. These days, Wedel is a worldwide known confectionery company, producing many varieties of high-quality chocolates, cakes, and snacks. The Wedel brand means superior-quality chocolate with an intense, familiar taste. This recognisable, deep flavour is owed to the top quality cocoa from Ghana and carefully selected ingredients. Despite its impressive history, the logo of the company is still based on Karol Ernest Wedel’s signature.

Wedel’s best-selling product is Ptasie Mleczko; a chocolate-covered candy filled with soft milk soufflé. The name literally mean „bird’s milk“, a substance somewhat resembling milk, produced by certain birds to feed their young. However, Ptasie Mleczko is also a Polish idiom meaning „an unobtainable delicacy“. In Poland it is one of the most recognized chocolate confectionery. Jan Wedel developed the first Ptasie Mleczko in 1936. Nowadays, Wedel supplies its famous Ptasie Mleczko in high volumes with different kinds of filling, such as chocolate, vanilla, lemon, coconut and – as recently introduced – caramel flavour, but always covered with a delicious chocolate layer.

In 2007 Wedel invested in a new production line for its Ptasie Mleczko. At that time, two open trays where stacked on top of each other with a paper insert in between, and then placed in a cardboard box. Not only did it make the chocolate covered marshmallows vulnerable for damaging, it also meant the use of a considerable amount of packaging materials. Several years ago discussions started with potential suppliers about alternative packaging solutions. The company came in contact with SEALPAC, manufacturer of high-class traysealers and thermoformers, through its distributor in Poland: Premac.

Also based in Warsaw, Premac suggested the use of tray-sealing technology to optimize the production process of Wedel’s Ptasie Mleczko. With this new packaging system, the expensive paper insert would no longer be required, resulting in a more sustainable pack. Also, the chocolate covered marshmallows would be much better protected due to the top film that is sealed to the tray. Furthermore, shelf life could be extended compared to the previous solution, and fully automated tray-sealing would considerably increase the overall production efficiency. In 2013 Wedel decided to purchase two double lane SEALPAC traysealers; an A8 and A10. Premac provided a smooth installation of the two traysealers at LOTTE Wedel, and took care of the training of LOTTE Wedel’s operators and technicians.

Optimal synchronization throughout the line

In the first months, Premac and Wedel put a lot of effort in increasing the output of the lines for Ptasie Mleczko by gradually optimizing the various steps in the production process. After producing the chocolate covered marshmallows according to their secret recipe in Wedel’s kitchen, they enter the loading zone, where they are picked up by robot arms and loaded six pieces at a time into the automatically denested tray. The trays are then transported to the buffer zone, where they are stored until they are handed over to the SEALPAC A8 traysealer. Arriving single lane, SEALPAC’s lane divider arranges for a smooth double-lane tray in-feed. Sealed 10 trays at a time, the sealed trays are converged back to single lane and then loaded by robots into their cardboard secondary packaging. In case of the SEALPAC A10 double lane traysealer, both the in-feed and out-feed are double lane. Here, no less than 14 trays are sealed in each cycle.

Both traysealers are positioned on the first floor of the historical Wedel building. As such, the impact of the equipment on the floor had to be calculated to see whether extra floor support would be necessary. With the A8 and A10 using servo technology, the vibration impact on the floor remained within boundaries. Using servo-driven lifting and gripper systems also allows for gentle handling of the tray and its contents. Furthermore, servo-technology reduces air consumption and maintenance cost.

The two traysealers are currently running at over 12 cycles per minute, achieving outputs of up to 175 trays per minute. Not an easy task when dealing with such a delicate product. As an example, SEALPAC applied heat-resistant protection plates in the sealing station to avoid the risk of melting chocolate. With the factory running 24 hours a day, 7 days a week, it is crucial that down-time of the lines is reduced to a minimum. Special crash detection inside the SEALPAC traysealer automatically recognizes if one of the chocolates is protruding the tray shortly before sealing. If so, the tooling will not close, hence preventing a potential crash and cleaning time. With such high speeds, the top film needs to be replaced quite often. Therefore, the A8 and A10 traysealer are both equipped with a tandem film arm, allowing to easily change to the next roll of film should the other one be finished. Last but not least, Premac has technicians stationed nearby, so professional assistance is always around the corner if needed.

The Ptasie Mleczko is primarily packaged 18 pieces in a tray (380 g). Each tray is reliably sealed with a printed film that remains easily peelable for consumers throughout its entire shelf life. For ultimate convenience, the tray is equipped with a large and clearly marked peel tab. In the sealing process, Wedel uses the SEALPAC InsideCut technology, where the film is first cut and then sealed to perfection within the inside of the tray. This provides a more attractive presentation than traditional outside cut, and reduces film consumption to a minimum. It also ensures that the trays fit nicely into their secondary cardboard box. Due to the extended shelf life, Wedel is able to export its products around the globe. The company already sells its products to over 25 countries worldwide, where USA, Canada and UK are currently key markets. With a strong marketing campaign (Wedel can for example be seen at exhibitions in Moscow, Paris, and Ireland), the distribution area is expected to expand in the coming years.

Employees working at LOTTE Wedel have a slogan, “Be like Wedel”, which is a synonym for being the best. For them it is a way of living, just like the Wedel brand has significant meaning to the Polish people. Walking through the city of Warsaw, this can be seen from the many shops that sell delicious hand-made chocolates and serve hot drinking chocolate of the famous Wedel brand. As a future project, the company is now looking into a new pack format for its Ptasie Mleczko. Naturally, LOTTE Wedel has taken up this project with SEALPAC, to develop a new tooling for its existing equipment, and Premac, to make any necessary line changes.