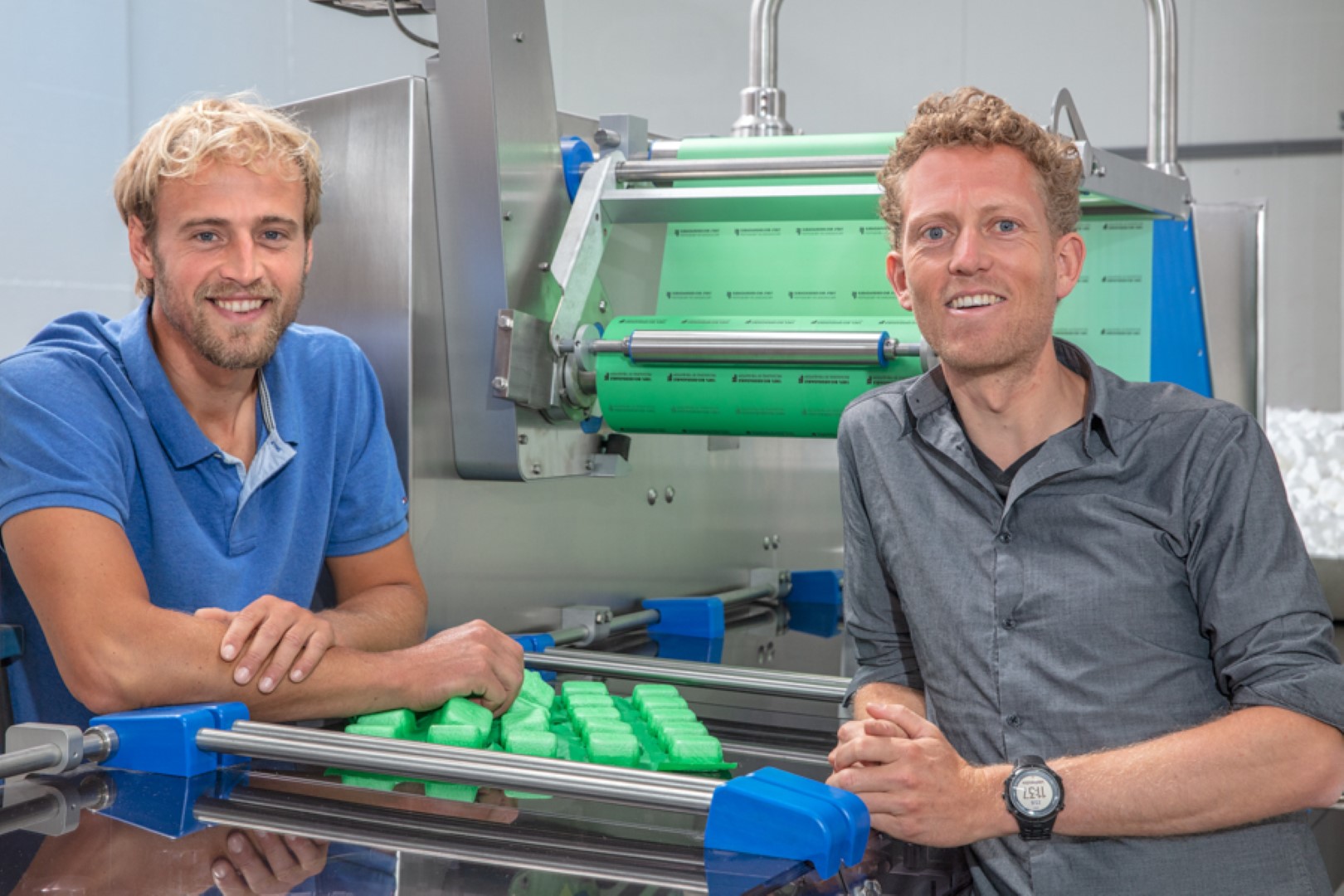 What was originally a start-up of two young students from the Leiden / The Hague region, has now become a growing company of two adult owners with a real office in Leiderdorp. After years of optimization, FIBI-buffer BV (www.fibibuffer.com) has proven its market potential, has built up a striking customer base, and is now ready to conquer the international market with its biodegradable packaging material, primarily intended to protect high-value goods against shocks and impacts during their transport and storage. The production takes place at Veenpack BV in Roelofarendsveen.This is where we met the two directors of FIBI-buffer, Arjan van der Plas and Peter Westgeest, to talk about the new phase their company has now entered.

For the two founders of FIBI-buffer, Peter Westgeest and Arjan van der Plas, it all started with a question. Why do we need so much packaging material for shipping products that is used for a short time only and just once? Can’t we be much more sustainable? It was decided to focus on shock-absorbing buffer materials, for which at that time mainly the significantly less durable PUR and polystyrene foam was used. The fact that PUR foam is currently being increasingly restricted by European regulations indicates that they were already on the right track then.

The year 2019 was a milestone for FIBI-buffer in many ways. Arjan van der Plas: “In that year our final product was determined, the patents applied for Europe and North America were approved and our production process in Roelofarendsveen was optimized. The focus has since been entirely on sales and promotion, although the first customers have been using our product since 2017 already.” For example, there are partnerships with various wholesalers in packaging materials, such as Storopack, Ratioform and DS80, and the materials are used by companies like Itab (products for retail interiors), Reconext (electronics), VAF instruments (maritime measuring instruments) and Pastoe (furniture), all of which attach value to a high-quality protection of their products.

However, the materials of FIBI-buffer are not only used in the Netherlands, but also in neighbouring countries, such as Belgium and Germany. There are also activities in France and Switzerland. FIBI-buffer has used the Corona period to make wholesalers, especially abroad, enthusiastic for their product. And with success. For example, IT components are protected with FIBI-buffer as soon as they arrive in the Netherlands from the United States, and a German supplier of garden accessories has switched to FIBI-buffer. Because this company works a lot with sustainable, FSC-certified wood, they demanded a matching, environmentally friendly protection.

BASF supplies the basic raw material called ecovio® to FIBI-buffer, both for the film that is processed on the thermoforming machine and for the filling, the so-called cubes. To make the cubes, BASF’s granulate, which resembles poppy seeds in shape, is stretched into small balls by means of steam. In a next step, in which steam technology is again applied, these balls are melted and pressed into a mould to become square cubes. In the beginning, the cubes had a conical shape, but today they are completely symmetrical, which greatly facilitates the further production process.

Peter Westgeest: “Thanks to recent investments, a uniform result can now be guaranteed for the cubes. The firmness of the cubes has also been optimized, so that our FIBI-buffer product can be used multiple times, an important advantage compared to polystyrene foam that often comes in dedicated shapes.” In the meantime, various initiatives can be found where the buffer material from FIBI-buffer is collected and reused within the chain. Incidentally, the resilience of the cubes is not inferior to that of polystyrene foam and is significantly better than that of air bags, which can sometimes leak. Since the cubes are packaged in thin film, they also retain their shape and do not break off small particles.

The cubes are packaged on an RE25 thermoformer. The top and bottom film used on this machine are made from the same raw material as the cubes. This is converted into reels of film at a Dutch manufacturer. The material supplied by BASF is 100% biodegradable (according to the European composting standard EN-13432), which makes FIBI-buffer a fully sustainable product. In concrete terms, this means that micro-organisms will automatically break down the material in an oxygen-rich and moist environment, but also that it can be industrially composted.

Search for a packaging machine

The thermoformer, which has been installed at Veenpack in Roelofarendsveen, was built in Emmen. At the beginning of the project, contact was made with potential suppliers of packaging equipment. FIBI-buffer ended up with Ultrapak, distributor of SEALPAC traysealers and thermoformers in the Benelux. Via Ultrapak, they eventually also came into contact with Repak, the factory where the SEALPAC thermoforming machines are built. At that time, the other suppliers, both German-made, had already dropped out, because they were very rigid and forced FIBI-buffer to buy a tool and/or to rent a machine. The fact that they could work with a Dutch manufacturer was also experienced as a plus.

From the side of Ultrapak and SEALPAC, immediate action was taken on the idea of ​​FIBI-buffer. This started with making a packaging drawing and testing the intended film on a tool specially made for this purpose. Beforehand, the question was: can a compostable film actually be formed properly? The proof was provided, also due to SEALPAC’s Rapid Air Forming technology, complete with extensive film thickness testing. Peter Westgeest: “After that came an important phase, because we did not yet have the means to buy or even rent a machine. However, in order to market the product, we had to be able to produce somewhere. We were given that opportunity, eventually even for a period longer than a year, during which we had the packaging machine at our disposal. It was placed especially for us in a separate hall in Emmen. This allowed us to regularly make products for already acquired customers and to show them to potential customers. The rest is history, because in the end our business grew, and we were able to buy the machine.”

Arjan van der Plas: “If we look back on the past years, the RE25 thermoforming machine has proven to be the most stable and predictable factor in the entire process. Of course, it is an advantage that we have a dry application, so that on average less maintenance is required, but the durability of the RE25 also helps.” Peter Westgeest adds: “I dare to say that the thermoformer has proven to be indestructible, especially when you consider that an extremely light product is being packaged.” The RE25 has a 5.6 index, so it produces 30 cubes per stroke. After a certain number of strokes, the produced reel is folded and placed in a large box. In order to do this properly, the thermoforming machine has been supplied with an extended out-feed.

To emphasize the sustainable character of FIBI-buffer, the cubes are packaged in green film. Each cube is perforated all round on the packaging machine and can therefore be removed separately, so that the buffer material can be folded into the most diverse shapes. Whether it concerns the corners of a cabinet or the complete enclosing of a hard drive, there is always a solution. Because the biodegradable film is quite elastic, the RE25 uses a motor drive when unwinding the top film. This means that FIBI-buffer is always assured of an optimal sealing result.

Time to scale up

Now that the product and production process have proven themselves, the primary goal is to scale up with FIBI-buffer, among other things by appointing more wholesalers and increasing the number of direct customers, especially abroad. FIBI-buffer puts a lot of time into online promotion and cold calling. Arjan van der Plas: “We know from experience that potential customers often have a long orientation phase, but also that a long-term commitment exists as soon as they are convinced.” Peter Westgeest adds: “Our product is functional, easy to shape and above all environmentally friendly. It is an ideal alternative for all companies that value high-quality protection for their product and that still use PUR or polystyrene foam. Or where paper is no alternative. We are already seeing applications where FIBI-buffer forms the protection between the primary packaging and the transport packaging.”

With Corona slowly disappearing, hence allowing for more travelling, reinforcing the economy and stabilizing the prices of raw materials, this process could be faster than everyone thinks. In the meantime, FIBI-buffer is secretly dreaming about production locations outside the Netherlands. As the two owners conclude: “In that case it is clear which packaging machine we will recommend!”