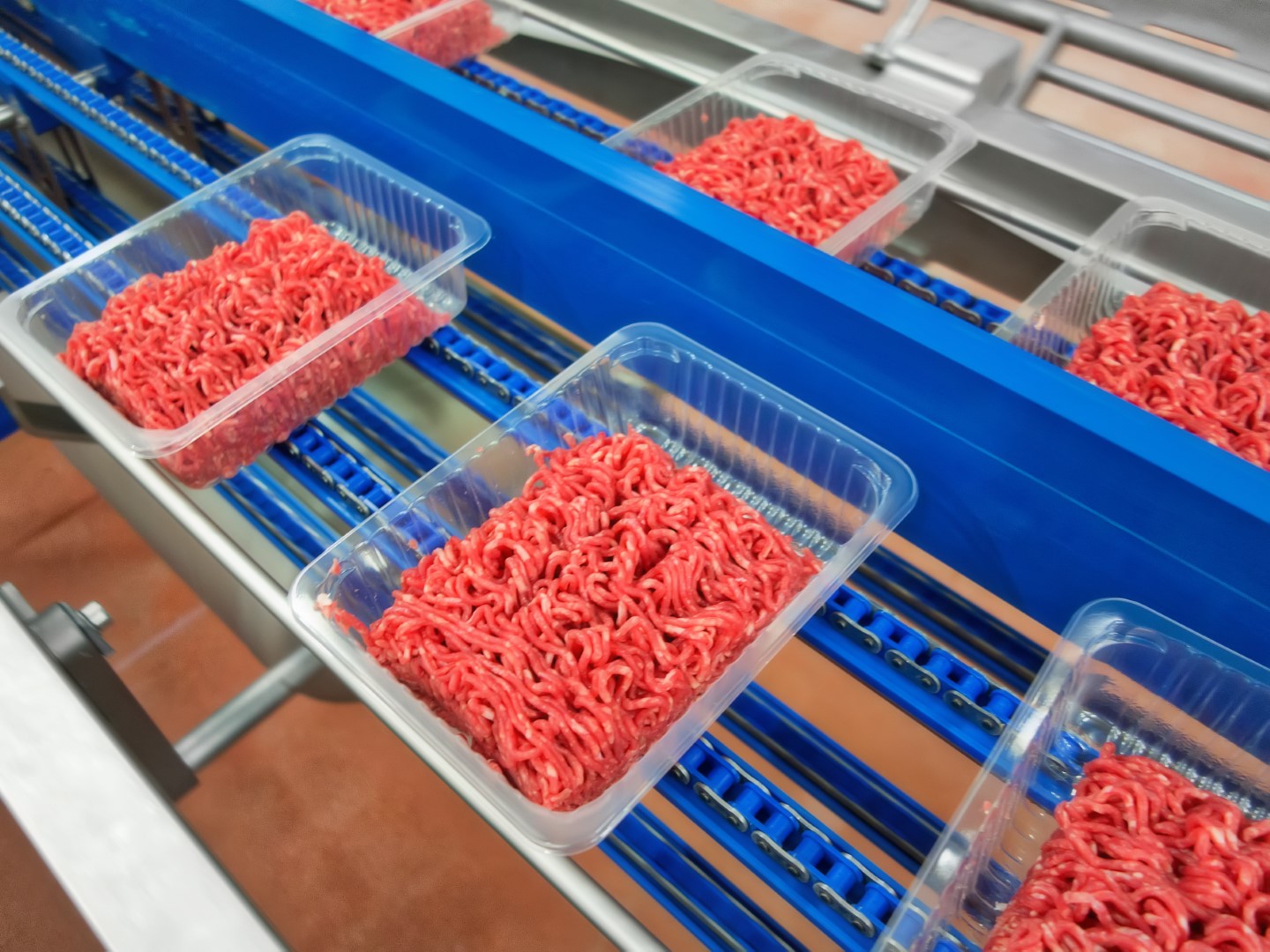 Edeka’s meat processing plant in Rheinstetten is considered to be one of the most modern in Germany. Around 900 employees process and package up to 600 tons of fresh and processed meat every day. Across an area measuring 40,000 square meters, one will find the complete chain of meat processing, packaging, warehousing and transport. In large halls the fresh and processed meat production takes place in up to three shifts a day, seven days a week. The end products, off which around 2,500 items are continuously in stock in Rheinstetten, are transported to 1,250 retail stores in the five states that belong to the Edeka Südwest region. The best-selling and at the same time most sensitive product in the case-ready segment is minced meat. Supplied in various grades (pork, beef, mixed, organic), it is manufactured and packaged daily in Rheinstetten under the strictest hygiene conditions. In order to guarantee reliable deliveries to the Edeka supermarkets in the southwest of Germany, a state of the art and high-output minced meat packaging line was implemented with the involvement of committed partners. Together with Edwin Mantel, Production Manager at Edeka Südwestfleisch, we look back at the special requirements in setting up this line.

One and one is three

EdwinMantel: „For our new meat processing plant in Rheinstetten, which was officially opened in 2011, handling and packaging large volumes of minced meat required a high-output line, consisting of meat grinding, portioning and tray-sealing. We set up a list of requirements, which for example contained a demanded output of 3 tons per hours. This translates to around 120 trays per minute. Furthermore, we wanted a particular texture and image of the end product, as well as an efficient production process. To complete this task, we met with several suppliers, in the end deciding to move forward with Handtmann and SEALPAC as our partners.

Although the individual requirements in terms of capacity, flexibility and product quality seemed to be relatively uncomplicated, main focus was on the interfaces. This is where optimal coordination between the individual components determines the efficiency of the entire line. Our experience had shown that a close and trusting cooperation between all partners involved is essential – otherwise we would never have reached the current solution. The cooperation started in October 2010, with the first equipment already being installed in May/June of the following year!”

The line starts with Handtmann’s VF 630 vacuum filler, which grinds and portions the meat to its exact weight in one single step. The combination of a vane cell feed system with separately controllable drive of the in-line grinder reduces the cutting load and shortens process steps. The geometry of the vane cell feed system ensures a safe transport and a constant product flow, which is important for weight accuracy. All process data are constantly monitored and visualized with the touch of a button. The batch traceability is supported by HCU software.

As for the product texture, with the applied cutting set and settings of the grinder drive, the grain size and bite of the ground meat are determined. Therefore, different cutting set parts are used in the production, which are customized to the individual product. Usually minced meat has a grain size of 2.2 to 4 mm. When changing products, only a different end hole plate has to be applied. The optimum machine setting is stored in the product memory of the machine. This allows for short set-up times and rules out faulty operation.

After portioning and check-weighing, SEALPAC takes over in the line with its tray denester, minced meat loader, as well as its lane divider that ensures double lane transport of trays into the SEALPAC A10 traysealer. This machine is capable of sealing 120 trays per minute under modified atmosphere (MAP). After sealing, the trays go through metal detection and labelling, and are placed directly into their transport boxes.

Mantel: „At EDEKA we almost exclusively use transparent mono PP trays, as customers are very critical and want to see exactly what they are buying. The tray configuration has changed during the project due to the many test runs. We are currently using ultralight 10g trays, which is absolutely no standard in our business. Lighter trays mean less materials, resulting in more sustainability and cost savings.”

Lighter trays also make the sealing process more challenging, as one will encounter a physical limit when transporting these trays at higher speeds. It is common that, with double lane in-feed, rectangular trays are transported narrow side leading as it provides more stability in transport. However, it also implies that the capacity of the tooling is not fully used, meaning that faster cycle times are required, which negatively affects the smoothness of the line as well as its maintenance costs. This is why SEALPAC works with patented snap grippers on its traysealers in high-output lines. They allow for an ergonomic and reliable long side leading transportation of the trays. As such, tray transport speeds are reduced by 30%, hence requiring less cycles per minute. For EDEKA it means more efficiency and improved cost of ownership.

How to remain flexible

Mantel: „Next to highest output, we also demanded a flexible line, because in the area of case-ready meat we are offering a wide range of products, which also differs in the time of the year, such as during the BBQ season. This requires a flexible set-up of the line. At the moment, we are supplying a large variety in minced meat products on the new line, but also the popular Cevapcici (kebab). Product changes can easily be made with minor changeover times. Service support also plays a major role in remaining flexible, which is something both Handtmann and SEALPAC offer us by having technicians standby in the area.”

Expectations for the future

Minced meat may be the top seller in the case-ready segment, but Edeka also sees a trend towards fresh burgers and meat balls, which are already quite common in the UK and Benelux. Increase of shelf life will remain an important item in the light of worldwide food loss. This is where SEALPAC offers its unique MAP+ system, which requires less vacuum resulting in reduced product exposure, shorter cycle times, consistent gas values and reduced gas consumption when packaging fresh meat. Furthermore, it supports colour stability during the entire shelf life of the product.

Mantel: „In the future, our production process will become more open. Product safety and traceability are playing an ever greater role for consumers. We will have to be highly productive and flexible at the same time. For manufacturing particular products, manual processes will always have a certain share, but in other areas we will be forced to further automate. Naturally, we rely on our established partnerships to achieve equally good solutions, such as our high-performance minced meat line.“