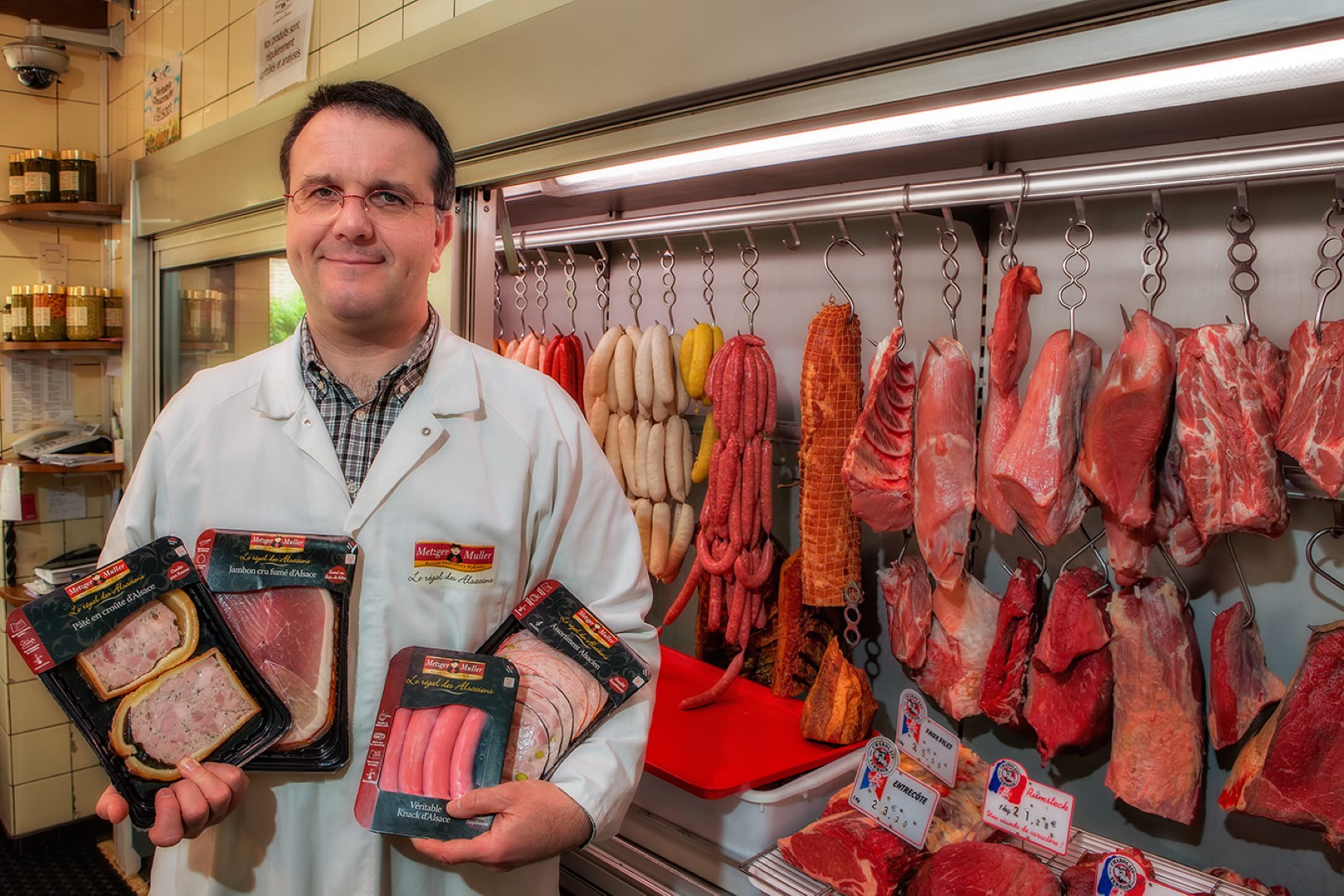 What started as a small butcher shop in a dead-end street in Ittenheim (Alsace region, France) has now become a well-respected meat processing facility supplying self-service meat packs to supermarkets as far as in Denmark. But one thing never changed at Metzger Muller: the butcher’s eye for highest quality, both in its meat products and in its packaging. We spoke with Daniel Muller, CEO at Metzger Muller, about his latest investment in no less than four SEALPAC packaging lines running a mixture of skin packs, shrink packs and modified atmosphere packs. A project that took almost two years of preparation, but that is now clearly paying off.

It was in 1937 that Marguerite and Michel Metzger opened their butcher shop in the beautiful village of Ittenheim, not far from Strasbourg, in the northeast of France. By chance ‘Metzger’ means ‘butcher’ in the Alsatian dialect. Being in a dead-end street, the couple focused on quality to draw customers to this rather unattractive location. And it worked! After the second world war its reputation spread beyond the village. When in 1959 the first supermarket opened in Strasbourg, Metzger was the obvious choice for supplying the delicacies.

In 1964 Roger Muller joins the company to create Metzger Muller Inc. Combining tradition with quality the still small-scale butcher shop starts supplying retail chains such as SUMA and MIGROS, which are flourishing in the sixties. In 1984 the company is one of the first in the region to pack its products for self-service. Although Roger Muller is still very much active in the company today, his son Daniel Muller becomes the new CEO in 2007. Under his command, Metzger Muller (www.metzger-muller.com) nowadays has an ultra-modern facility employing 64 people for processing and packing its premium meat products.

In the mid-eighties Metzger Muller immediately recognizes the trend towards self-service products. Therefore, a new facility is built directly adjacent to the butcher shop to allow for small-scale processing and packing of its processed meat products. As growth continues, Metzger Muller’s facility is expanded even more and the demand for high-output packaging equipment increases. Its low-speed tray-sealing line and vacuum chamber machine are no longer sufficient. When in 2009 Metzger Muller decides to modernize its existing processing facility, SEALPAC becomes one of the contestants for supplying the packaging machinery.

Precision of a watchmaker

It was Sealpac France (www.sealpac.fr) that established the very first contact with Metzger Muller by introducing itself as a supplier of high-quality packaging equipment. In the early stages of the project, Metzger Muller had to get acquainted with SEALPAC’s product portfolio and company philosophy. As such, CEO Daniel Muller visited the SEALPAC factories in Germany (traysealers) and Holland (thermoformers). Muller: “What I remember most of this visit is how structured and clean the production facility was. Each employee was wearing the same blue uniform, and everybody was working in a uniform way. To me, it looked like the precision of a horloger (watchmaker). There is no better guarantee for quality than that!”.

Over a period of time of around two years Metzger Muller had regular meetings with Sealpac France to discuss the possibilities for the modernization of its facility in terms of machinery and packaging solutions. Numerous pack samples were made by SEALPAC to show their actual appearance, but also to determine important characteristics like seal integrity and easy opening. Finally, in 2011 Metzger Muller decided to invest in several SEALPAC A6 traysealers and a SEALPAC RE25 thermoformer for packing its products in a large variety of packaging systems.

With its meat mainly coming from the Alsace area, Metzger Muller still has a strong focus on producing regional specialties with tempting names like tourte aux Riesling d’Alsace, knack d’Alsace or palette à la diable. This last product, consisting of pork meat in a delicious Alsatian mustard sauce with wine and potatoes, posed an interesting challenge, as highest seal integrity had to be achieved. Muller: “When we started talking about new equipment we considered stopping the production of our palette à la diable, as we saw no real chance of transferring this to a self-service concept. That is, until Sealpac France explained us the option of shrink packaging on a fully automated thermoformer. With several test runs, they showed us that highest seal integrity was achieved while giving this product an optimal presentation. We then started thinking about other products for this type of packaging solution, and are currently running ring sausages and smoked meat pieces on the SEALPAC RE25 thermoformer“.

Before launching its shrink packs Metzger Muller insisted on testing various types of shrink film to determine their transparency and shrinking properties. Sealpac France strongly assisted in this process and found out that Krehalon shrink film provided the best solution for Metzger Muller’s demands. Using this type of film, packs are now formed on the SEALPAC RE25 thermoformer, manually loaded with products, sealed under vacuum, and cut both in cross- and longitudinal direction. The resulting vacuum packs are then placed in a Supervac shrink tank to achieve their attractive second skin presentation.

Metzger Muller uses a skin packaging system for its sliced meat. Here, a high-transparent barrier film fits the contours of the product like a second skin. After slicing the meat on a Treif system, the slices are loaded onto the tray and transported towards the SEALPAC A6 traysealer. Not an easy application, so Metzger Muller spent quite a lot of time testing. Muller: “Skin packaging had been known within our company for over 20 years, but SEALPAC’s TraySkin® system with the possibility of product protrusion really surprised us in a positive way. We obviously wanted to have no wrinkles in the skin film after sealing, the relatively low tray should not deform in the process, and we wanted to significantly increase the output of trays per minute. After extensive testing we found that the FLEXION skin film series produced by Flexopack provided the best results. But SEALPAC made it happen with its compact A6 traysealer!”.

Producing every morning from Monday to Saturday, Metzger Muller’s processed meat leaves the facility each day to retailers and wholesalers in the area, as well as to supermarkets in countries as far as Belgium and Denmark. Muller: “We are investigating the sales opportunities for our premium meat products in other North European countries. Not an easy move, because in most of those countries retail margins are very small. Also, unlike our Alsace region, these countries tend to have less of an eating culture. Food has to be convenient, easy to prepare and not too expensive. We at Metzger Muller would love to teach consumers in those countries that good food provides pleasure, and that our premium meat products do just that.“

Quality over many, many cycles

Metzger Muller has no full-service technical department to maintain its equipment. It has a service agreement with Sealpac France that guarantees immediate assistance of SEALPAC’s technicians if required. Until now, Metzger Muller is quite happy with the performance of all four packaging lines. As Daniel Muller concludes: “SEALPAC provides a consistent quality over many, many cycles”.