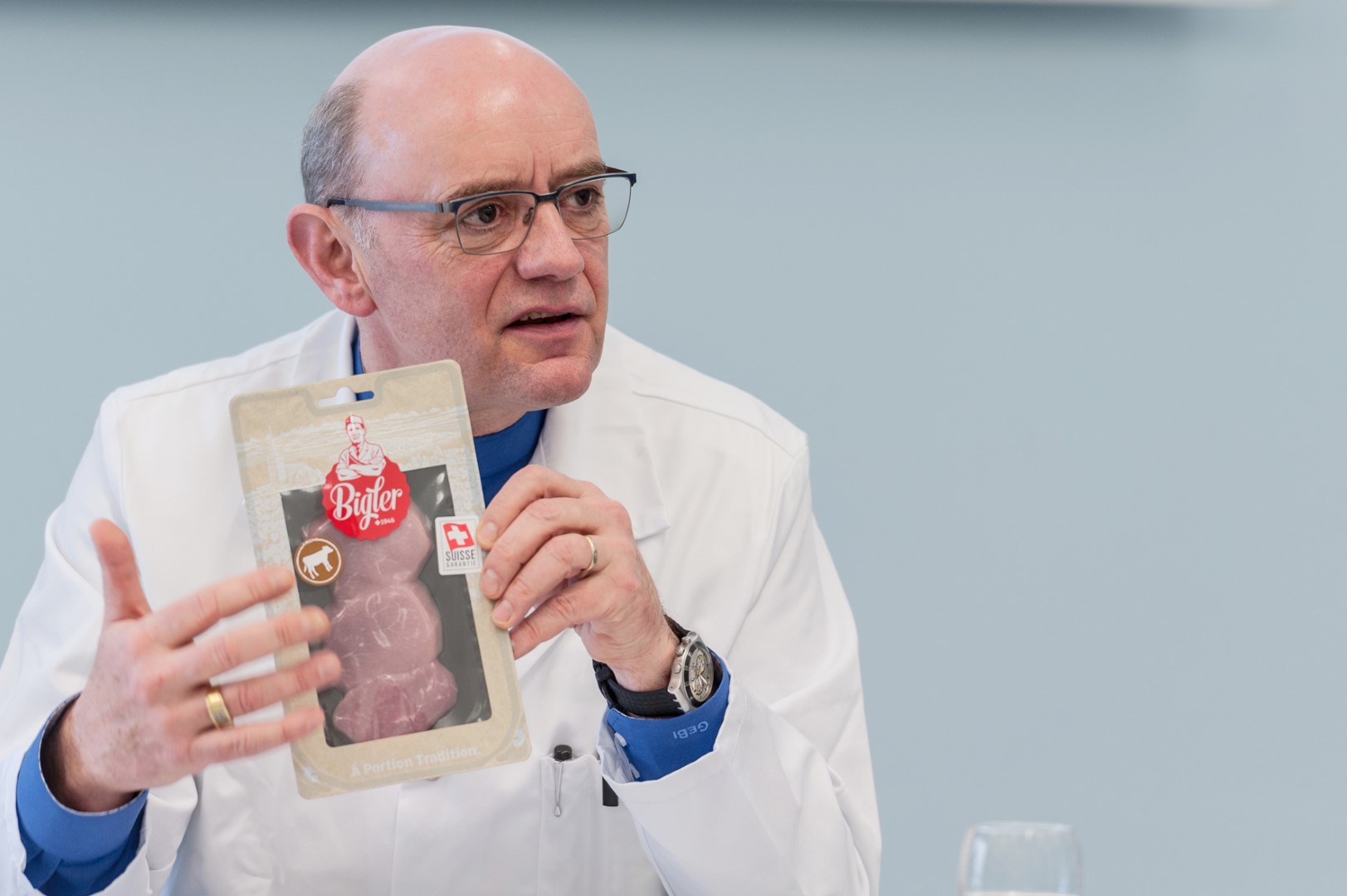 Under the claim „Ä Portion Tradition“, Swiss company Bigler AG Fleischwaren (www.bigler.ch) promotes its extensive range of fine meat products, supplemented by sandwiches, canapés, fresh salads and seasonal items. Bigler is proud of its craftsmanship in food processing, a family tradition that is constantly reinvented through innovative products and modern processes. Last year, the family-owned company in Büren an der Aare, which employs around 600 people, initiated a relaunch of its del Lago brand. Under the new brand name Bigler, the entire product range is now presented in a fresh and uniform packaging design. We spoke with Gérard Bigler (Head of the processed meat division) and Markus Bigler (Chief Financial Officer) about this relaunch, the differences between the meat markets in Switzerland and the rest of Europe, as well as about current packaging trends.

For approximately twenty years, Bigler has been present on the market with two different brands: Bigler as the umbrella name, and del Lago as the main brand in the self-service sector. Since autumn 2016, there has been a new strategy: all products are now marketed in new packaging under the brand name Bigler. Markus Bigler explains: „With the del Lago brand we were well established at retailers and consumers. However, the brand name was often not directly associated with our company Bigler. Therefore, we examined if we were still on the right track and decided for a new brand appearance.” Gérard Bigler adds: „Our customers now understand at first sight who they are dealing with. The new logo communicates exactly what we stand for: it symbolizes our craftsmanship as a butcher, shows that we vouch for our products with our family name and underlines their Swiss origin. All in all, it explains our Bigler promise: to produce butcher-quality meat products from the Swiss region.”

In Switzerland, ‘from the region’ is similar to what is sometimes labelled as ’bio‘ in other European countries: nature-oriented, animal-friendly and with shortest transport routes. This is especially important in the meat sector, as ‘from the Swiss region’ conveys trust. Markus Bigler: „Looking at our overall image after the relaunch, we have deliberately chosen silent branding and are using cream-coloured printing for our packaging, whose design elements discreetly resemble those of the former del Lago brand. In this way, we want to distinguish ourselves from the often bright and shiny appearance of other players on the market.”

The new packaging design is characterized by its natural look and pleasant haptics, owing to a special film with paper look and feel, which was developed by Bigler together with its partner Bemis. This new Paper-Like™ film closely resembles real paper and gets its paper feel from a special printing technology. Gérard Bigler: „This type of film already exists for a couple of years, and we were immediately interested after it was presented to us by Bemis. That is what makes long-term partnerships with suppliers like Bemis and SEALPAC worthwhile: new ideas are being presented, discussed jointly, and then further developed until everything matches. In this case, it took about two years from the first idea up to the launch of the new packaging at retail. The project was executed with great personal commitment from all stakeholders involved – within Bigler, but also within our long-standing partners Bemis and SEALPAC.”

For many Europeans, Switzerland has a slightly different culture when it comes to the presentation of food products at retail. Especially within the meat segment, vertical presentation has been the standard for a long time already. By presenting meat products in a standing or hanging position, they are more attractive to Swiss consumers. This explains why skin packaging has seen a much stronger growth in Switzerland than in various other European countries, such as for example Germany. The advantage of skin packaging is that the product remains securely fixated and does not move, resulting in an excellent appearance. For retailers, skin packaging allows them to fit more products on the shelf. Main applications in Switzerland are fresh and marinated meat, but vertical presentation is also common for seafood and even ready meals.

Since 2011, Bigler has been using SEALPAC’s TraySkin® and ThermoSkin® systems with Bemis SkinTite™ film to create so-called TriWeb packs. Here, the product is skin packaged directly inside the (pre-formed) tray, after which a second top film is applied. By doing so, a flat surface is created that allows for smooth labelling. Furthermore, the skin packs can now easily be stacked with minimum risk of leakers. The additional chamber, created by the second top film, even allows for extras, such as garlic butter, spices or recipes.

What sometimes holds back the development of skin packaging for fresh meat is that the colour of the product inside the vacuum pack will be less red. Gérard Bigler: „The fact that meat products in skin packaging are characterized by a darker red has been well received by Swiss consumers. In my view, however, the colour is not decisive. It is important that the product as a whole convinces with an appealing appearance.” Therein the Swiss differ from other European countries, where meat is mainly packaged under modified atmosphere, because consumers there are mostly conservative and prefer meat with a bright red colour. On the other hand, the demand for skin applications is growing noticeably in Germany as well these days. Especially high-quality products, such as premium or organic meat, are increasingly offered in skin packaging, because the quality of the meat can be improved: under vacuum it will mature better, remain beautifully tender and stay fresh longer.

Gérard Bigler: „I am pretty certain skin packaging will also revolutionize the German and other European markets, as the advantages speak for themselves. Due to the vacuum, at least two days of extra shelf life are achieved, which is considerable for meat. In this way, the shelf life of fresh meat can be extended to 12 days, which is extremely important for retailers, as they can now cover two strong-selling weekends.” Markus Bigler adds: „But maximum shelf life can only be achieved with an optimal cooling chain. To keep this under control, we own a fleet of no less than 60 trucks that drive all over Switzerland on a daily basis to provide fresh products to the retailers. This is cost-intensive, but product quality is our main asset to our customers. And we owe it to our quality commitment, which we have underlined again with our relaunch.”

Bigler will soon be opening a whole new building that allows the company to meet the ever increasing demand for high-quality convenience products. In its new premises, Bigler will for example be able to process vegetables and produce its own sauces. Another example of keeping as many production steps as possible in house to meet the quality promise. Gérard Bigler: „Convenience is still an exciting topic in Switzerland. Here, from my point of view, especially those products have a future that are easy to prepare, but leave the end user enough space to add his or her own touch. By the way, I do not see a contradiction between our claim to offer traditional meat products to the best butcher’s craftsmanship as well as convenience products, because the market knows different types of consumers. On the one hand magazines and TV shows with regard to cooking are booming, which stimulate consumers to carefully select their meat. On the other hand, there are still plenty of people who are more interested in quick and easy preparation, yet value product quality. We simply want to address both.”

With new players like Amazon Fresh, but also with existing retailers supplying this type of service more and more, online trading and home delivery of food products is increasing. Markus Bigler: „Of course we also observe this trend closely. But if you look at the food segment in Switzerland, you can see that the growth rates are comparatively low. I am sure this area is interesting for certain niche products, but meat is simply a matter of trust – and the trust of consumers must be gained by the online retailer first. We are currently not active online, but we will certainly adjust to the needs of our customers if necessary. As far as the future of supermarkets is concerned, they now have a great opportunity to show their added value compared to online services. They can offer consumers a true shopping experience by allowing them to see and feel every item. This is quite important for fresh products, and particularly meat. I believe the trend is moving away from megastores back towards shops that reproduce the traditional market setting in your local town square.”

Sustainability has long been a major issue in the packaging industry. Companies are looking for new technologies that reduce the amount of plastic in packaging, but can still guarantee food safety. Both SEALPAC and Bemis are intensively involved in research and development projects in the field of sustainability, sometimes even jointly. This recently led to a new packaging system that promises great potential. TraySkin® packaging usually consists of a plastic tray and a skin film, but nowadays there is also the possibility to use cardboard. In this new system, called FlatSkin®, a cardboard carrier is laminated with a polymeric protective layer. By means of Bemis’ versatile SkinTite™ film, the product is skin packaged directly onto its flat carrier: well-protected, highly visible and with excellent appeal. After use, the polymeric layer is easily removed from the carrier to allow for separate disposal. As FlatSkin® uses a high percentage of recyclable materials, the system convinces from an ecological point of view. Furthermore, the cardboard allows for excellent printing, hence offering some unique branding opportunities.