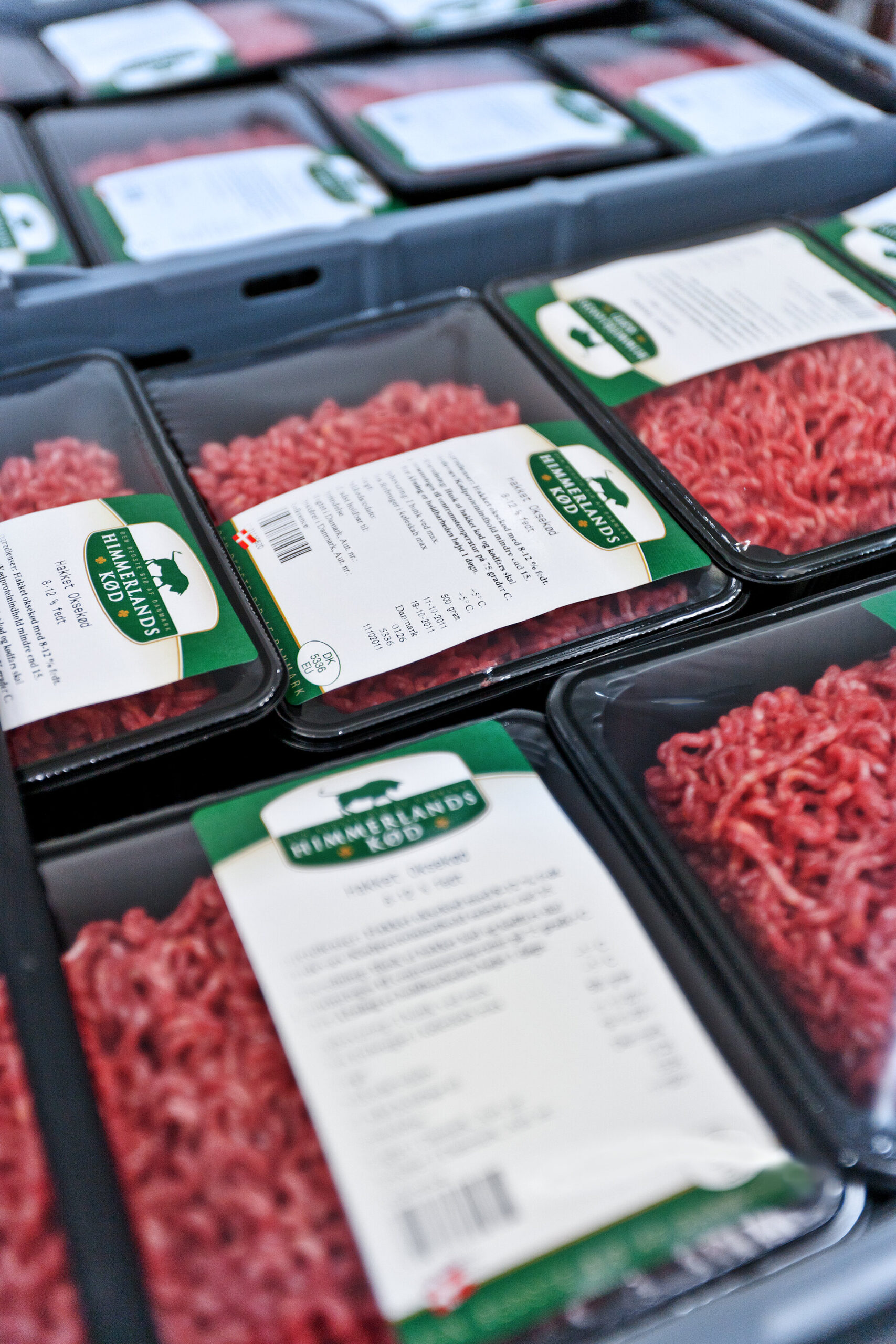 When Danish meat processor Himmerlandskød built its new factory in 2008, the key word was versatility. In choosing the right equipment, SEALPAC’s A6 fully automated traysealer was positioned at the heart of Himmerlandskød’s line for minced meat under modified atmosphere (MAP), resulting in a packaging process that produces quality meat packs for both retailers and wholesalers. We spoke with Søren Andersen, co-founder and director at Himmerlandskød, about his ultramodern production facility in general and the minced meat line in particular.

What started off as a small abattoir in Aalestrup, in the northern Jutland province of Denmark, has now turned into a fully operational meat processing company. As from 30 October 2008, a new factory was founded in Farsø under the name Himmerlandskød (www.himmerlandskoed.dk), referring to the region it is located in. At present around 50 employees are involved in the deboning, mincing and packaging of high-quality beef, veal and pork, 90% of which still comes from the original slaughterhouse in Aalestrup.

At the start of the company in 2008, a deboning line with 100% traceability was installed. Soon after, Himmerlandskød started searching for a processing line for its minced meat. After coming into contact with Nemco, distributor for SEALPAC traysealers and thermoformers in Denmark, a line was designed for packing minced meat under modified atmosphere according to Himmerlandskød’s specific wishes. Currently, the company produces a versatile range of volume and retail packs for the Danish market, with a SEALPAC A6 traysealer at the heart of the line.

It is all about flexibility

Being a medium-sized company, Himmerlandskød’s main requirement was flexibility in production. As Søren Andersen, co-founder and director, explains: ‘One minute we will be packing a large order for retail packs of minced meat, the next minute we may be producing small batches of volume packs for varying products such as burgers, liver or goulash dices. The line had to be set up in such a way, that we would even be able to manually pre-load trays and place them on the in-feed conveyor, after which they would go through the regular process of sealing and labelling.’

One of the things that lead Himmerlandskød to the SEALPAC A6 traysealer was its quick tooling exchange system. Andersen: ‘When running different tray sizes and products on a single day, it is crucial that tooling exchanges can be performed by our operators fast and easy. SEALPAC’s quick exchange system, which requires no hand tools and can be done by our biggest man up to our smallest lady, made the difference. It was demonstrated to us when visiting Nemco’s showroom in Viby and convinced us right away.’

The whole process in one hand

Himmerlandskød gladly relied on Nemco’s expertise in setting up complete lines with different equipment suppliers. The main items in the current line are the Vemag filling and portioning systems, Carsoe denester, SEALPAC traysealer and ELS labelling system. The line was designed in such a way that the portioning systems for minced meat and fresh burgers can easily be exchanged. Søren Andersen: ‘Working with Nemco meant that everything was arranged centrally by them. We would never have been able to do this ourselves.’

Nemco fully supported the installation of the minced meat line, up to training of the operators. A challenge in designing the line was limited space. Andersen: ‘In the end we came up with a process that requires 90 degree turning of the trays twice. At the start of production, these corners proved to be weak when running large orders at high speeds. Nemco came over to fine-tune those critical areas and was able to cut our production time by 50%. Other changes were also accommodated by Nemco as we went through the learning curve of the installation.’

Even today, after just six months production, the line is still being fine-tuned in order to increase its efficiency to the maximum. An online gas mixer was bought to replace the current pre-mixed gas tanks, while Nemco is looking at reducing the exchange time for both top film and labels. Furthermore, Himmerlandskød A/S is considering the installation of a conveyor to have the freshly minced meat directly transported to the packaging line, instead of pushing trolleys from one production area to the other.

As fresh as it gets

Himmerlandskød produces 3 kg trays for Danish wholesalers aiming at restaurants, office kitchens and canteens. Both minced meat and fresh burgers are supplied in this gastro tray measuring 325 x 265 mm. In addition, the company packs minced meat in trays of 500 grams for retailers. Here, the standard in Denmark (as well as in various surrounding countries) is the 190 x 144 mm tray. Both tray sizes are sealed with SEALPAC’s unique InsideCut system, ensuring a perfect pack presentation whilst minimizing film usage at the same time.

By using a common gas mix of 80% O2 and 20% CO2, Himmerlandskød’s shelf life is eight days after production. Andersen: ‘As the mincing of the freshly deboned meat takes place in our factory in Farsø without the use of additives, our raw material is as fresh as it can be. This makes Himmerlandskød stand out in an otherwise price-driven market segment. Or as our logo states: The best bite of Denmark!’

Although there are discussions within the Danish industry about easy opening of fresh meat packs, most of these packs are still supplied without a peel tab, showing that it is no major issue yet. Andersen: ‘What we do expect is a transition from black trays to transparent trays, in order to give consumers a clear view of the product. Furthermore, skin packaging appears to be picking up for particular types of meat, as it allows for vertical presentation at retail. Minced meat, however, will most likely remain a market for modified atmosphere packaging.’

A very important issue at Himmerlandskød is traceability. All of its meat packs are equipped with a barcode, which consumers can scan by means of their smart phones. It will lead them to a website, where they can read the full history of the meat inside the pack. This involves the origin of the animal, the location where it was deboned up to the carbon footprint for producing the pack.

Søren Andersen concludes: ‘We want to stay ahead of the domestic meat market and will continuously search for the latest sustainable technologies. As an example, we would like to reduce the price for packing our trimmings in shrink bags by moving to fully automated shrink packaging on a thermoformer. Luckily, also here Nemco and SEALPAC will be able to help us out with the right solution.’