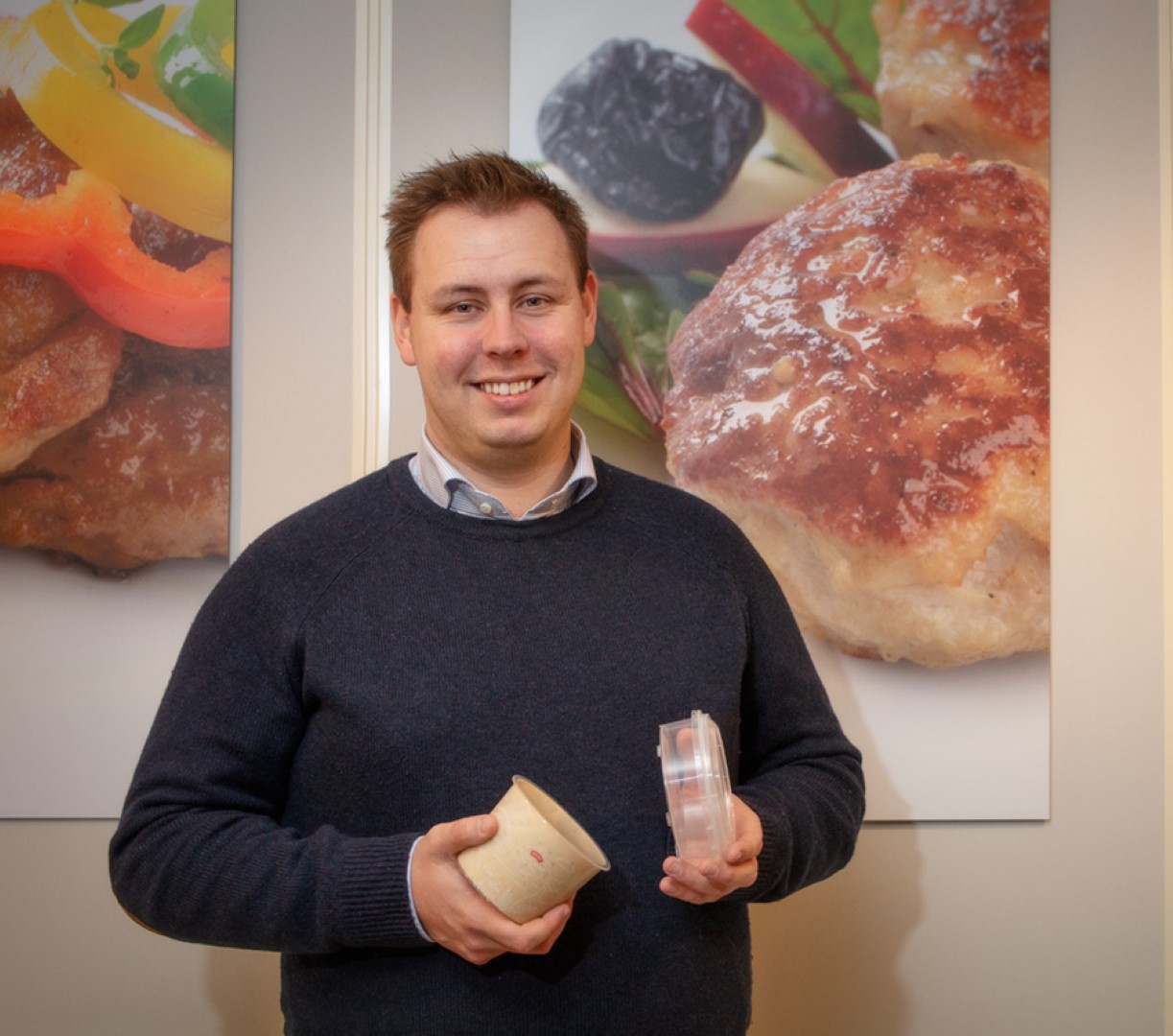 Norwegian company MatBørsen AS (www.matborsen.no) was founded in 1994 by Freddy Henriksen and his two sons. Building on their previous success in meat products, they decided to switch to the growing segment of ready meals. Today, one of the sons, Dag Freddy Henriksen, is still running the company. Since 2012, his son Freddy André Henriksen, grandson to the founder of MatBørsen, holds the position of Controller, making him responsible for finance, purchasing and project management. As such, he is strongly involved in the company’s new investments. We talked to him about a click-on soup tray that was launched at Meny retail stores in 2017, for which MatBørsen invested in a line solution primarily based on SEALPAC equipment.

In the year 2001, MatBørsen moved to its current production site in Stokke. Since then, business has been on the rise. Turnover went from 20 million Norwegian Kroner in 2001 to approximately 650 million Norwegian Kroner in 2018. Last year alone, MatBørsen’s production volume grew by 35%. In 2012, NorgesGruppen ASA took over the company. Freddy André Henriksen: “This takeover gave us the muscles to grow. As a result, we have been able to invest around 130 million Norwegian Kroner in equipment, including the new line for our click-on soup tray.” Nowadays, MatBørsen employs 230 people, but it still has the atmosphere of a family-owned company. In its central hall, the first thing one notices is this slogan: Good taste and a simpler everyday life by being the best in what we do. It describes MatBørsen well: the company’s key success factor is producing homemade ready meals with high-quality ingredients. Henriksen: “We maintain our quality by appointing ‘chefs’ in the company. These are not real chefs, like in a restaurant, but they are our company’s ambassadors. Every batch we produce must be tasted by one of our 20 chefs, which is the best quality control we can have!”

Next to the homemade products, MatBørsen differentiates itself by offering flexibility. Henriksen: “We have batches of 100 kg, but also produce up to 15 tons of a single product. Therefore, our equipment must be able to handle a large variety of products with different outputs. This is unique for a mid-sized company like ours.” Another characteristic of MatBørsen is its high level of innovation. Henriksen: “We are constantly developing ready meal concepts. In 2017, we introduced 60 new products at retail in a period of just two months. By doing so, we want our retail customers to be able to distinguish themselves from other retailers. Like we have done with the click-on soup tray that we are producing for Meny since 2017.”

In 2009, MatBørsen purchased its first SEALPAC traysealer after visiting the European Seafood Exposition in Brussels. They were looking for an efficient line to produce their existing range of Fresk & Ferdig (Fresh & Ready) meals in two- and three-compartment trays. Henriksen: “We saw the A5 traysealer at the SEALPAC stand and were impressed by its flexibility. Owing to the tooling quick exchange system, we would be able to produce various products in different tray formats on a single day with limited downtime.” Today, MatBørsen has four SEALPAC A5 traysealers, which can be found in two different buildings on their premises. As such, Freddy André Henriksen visited SEALPAC’s traysealer production facility in Oldenburg, Germany, on several occasions: “For us, this production site accurately represents SEALPAC’s image of supplying functional and reliable packaging machines at a consistent price.”

In Norway, for its traysealers, SEALPAC is represented by the company MPack AS, who have been a long-lasting partner of MatBørsen. Henriksen: “Saeming Myhre at MPack has always been an important consultant for us. He is not just selling equipment, but also continuously suggesting innovative packaging systems. Furthermore, MPack’s service technicians ensure an excellent maintenance of the equipment and assist us in optimizing our line efficiency. They do that in close cooperation with our own in-house service department.”

MPack has a strong record in setting up full line solutions for its customers. This was proven in 2017 when a completely new packaging line had to be designed for a click-on soup tray. The idea for this tray started in 2016 at the IFFA exhibition, the leading trade fair for the meat industry. In Frankfurt, MatBørsen encountered Naber Plastics, a Dutch injection-moulding company. In presence of MPack, they started talking about a possible new solution for their existing ready-to-eat soup concept. Until then, the soup was supplied in bulk to retail stores and served at request in individual portions to consumers. However, due to the limited shelf life, any remaining soup in the bulk packs had to be thrown away just three days after opening them. In addition, at that time MatBørsen was only able to package the soup after cooling it down for a while, normally one day after preparation. The result of visiting IFFA 2016: Naber Plastics started designing a two-part soup tray while SEALPAC worked on the sealing and lidding technology.

Henriksen: “SEALPAC, together with MPack, took up the challenge. During this project, our communication with them was direct and easy. As an example, we wanted the lid of the click-on tray not to be fully fixated, as it would have to be opened again at retail. SEALPAC constructed the lidding system in such a way that the lid is clicked only partly without it coming off during transport or at retail.”

The new line starts with a SEALPAC AS-LS1200 denester that carefully places the soup trays onto the in-feed conveyor, after which they are transported to the Leonhardt filling system. This is done with SEALPAC’s unique Walking Beam system, which guarantees the most accurate positioning of the trays underneath the filling heads. Furthermore, after filling the trays with soup, the Walking Beam ensures immaculate transport of the liquid product without spilling over the edge. The trays are securely sealed on a SEALPAC A7 traysealer with 5-impression tooling and transported to the lidding section. Here, the first SEALPAC DA-M770 lidding system clicks an empty tray onto the sealed soup tray. Shortly after that, the second DA-770 lidding system places a snap-on lid onto the empty click-on tray. Finally, the trays go through x-ray inspection (Elprom), are labelled from below and above (ELS), and placed in cardboard boxes by robots.

With the new line, the soup is now prepared in a tumbler, pumped into a cooling system and packaged at 4 to 6 degrees after approximately one hour. Furthermore, the soup is sealed under modified atmosphere by adding CO² and reducing the residual oxygen level to below 0.4%. As such, it now has a shelf life of up to 30 days.

The story continuous at retail

The soup tray is available exclusively at the Meny supermarket chain in Norway, which has approximately 200 stores in the country. At the supermarket counter, the consumer chooses a soup and asks for any fresh ingredients that are placed into the empty click-on tray. This tray with ingredients is then weighed, provided with the snap-on lid, clicked onto the soup tray and labelled with a price tag, so the consumer can pay at the cashier. At home, he or she removes the top film of the soup tray by means of the easy-open peel tab, heats up the soup, adds the fresh ingredients and boils it for just three minutes. With this innovative soup tray, MatBørsen allows consumers in the Meny supermarkets to make an individual choice while offering a high-quality meal with optimal convenience.

Henriksen: “After introducing the new tray, our production volume for soups initially decreased, but this was the result of less food waste at retail compared to the previous bulk packs. Now, we are back at our normal volume and still growing. We are currently producing four different soups, where our best-selling product is our delicious fish soup. We produce 50,000 trays of that soup per month.”

Always searching for new ideas, MatBørsen also became interested in the Halopack concept for another of its ready meal lines. Halopack trays are based on cardboard, but have a plastic inner layer that can be separated from the cardboard for easy waste disposal. Henriksen: “This idea also started at the IFFA 2016 exhibition, where we saw the Halopack trays in the supermarket section of the SEALPAC stand. We were immediately drawn to its exclusive image and branding opportunities by being able to print the cardboard all around. In fact, it was only later that we realized the plastic reduction compared to the tray we used before.

With the Halopack tray, we now save around 8 tons of plastic waste per year. Overall, by moving from cold to hot filling and by applying new packaging formats, we have been able to significantly increase the shelf life of our products while reducing plastic waste by up to 120 tons in 2018. Although we see the demand for plastic reduction picking up in Norway, we always have to consider shelf life before moving to new materials. Drinving from our facility in Stokke to the North of the country is similar to driving from Stokke to Rome! Therefore, we will always have to weigh the improved sustainability against shelf life and cost.”

When it comes to the company’s plans, Freddy André Henriksen is very clear: “With the current growth rate and the already limited space in our factory, we need to place a new building between the current production halls that connects both of them. By creating more space, it may also become possible to pre-package the click-on tray with fresh ingredients here in the factory. In any case, we expect our company to show a steady growth in the coming years and may well need some more SEALPAC lines.”